Costa Rica #1 - Alajuela to Monteverde! Uh, No, I Take That Back. LAX to Alajuela!

As usual, SoCal had rain the day we left.
It seems everytime we head out or are returning from vacation it's raining.
Storming.
Pouring.
Floods threatening.
It's okay when we leave, but not so good when we are returning.
So we left several hours before our flight in attempts to get ahead of the possible chance of mudslides on PCH.
All good, except what the hell do we do at LAX for the next 9 hours?
Really, I think it was nine hours.
We are considering this day to be "The Day we Lived at LAX".

Ok, I have officially changed the post title to "LAX to Alajuela".

Finally a chance to go sit in that round restaurant / bar thing my brother told me about years ago! 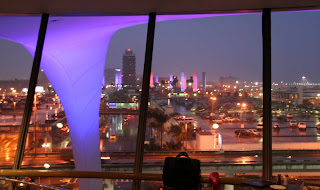 Which if you know LAX, that is rare.

More rain, then drag our bags back across the road to finally check in eons later.
Got lucky and some poor soul from Taca took pity on the drowned, wet, slightly buzzed gringos dragging their bags through puddles and around abandoned luggage carts, through the cow going to the slaughter house lines a half hour before they were officially open.
YAY!
No more dragging bags.

Up to some other restaurant for dinner and more drinks.


Hurry up and burn up those last of those nine hours.
Watch and listen to a sobbing bride and frantic new husband who missed their honeymoon flight to Tahiti.
Ugh.

Arrival in Alajuela, Costa Rica at who know's what time feeling like CRAP!

Rental car ~ oh gee, this looks nice (big mistake ~ don't go for looks, go for TIRES in Costa Rica!) and off to Hotel Brilla Sol.
Which we found by complete luck.
Luck and really good navigation on my part. 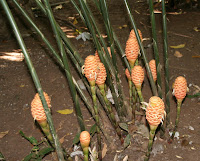 All good.
Beers.
Lunch.
Naps.
And a visit from 4-P.A.C.K. !!
Our friends from G-dock way back and Mexico, who are now living outside of San Jose. 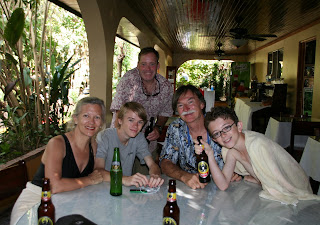 Andrea, Casey, Jim, Karl and Patrick.
(Jim is not part of the PACK - that is for Patrick, Andrea, Casey & Karl)...

Way fun to catch up!
Hugs, stories, a dip in the pool and a walk up the street to a Soda for dinner.
Another big mistake.
Note to self: Wear real shoes while walking in Costa Rica.
Sprained my ankle on the way...
Ouch.
And remember, this was going to be a HIKING vacation!
Dinner, hugs goodbye, ice on ankle and wine...

Wait, something is missing...?

Labels: off to monteverde in the morning

I love your banana spider! And that funny looking flower! What is it anyway? I will now get to enjoy your trip with you! Yea! And the next trip I will REALLY be with you! Can't wait!