We left Isla Isabel at 5 am one day.
I think it was a Sunday.
Could be.
We had smooth, calm seas and little wind in the morning.

And this tired little visitor.
He stayed on the lifeline until Jim had to go up on the cabintop to retrieve the loose mainsail halyard...
Hmmmmm... wonder how long that had been hanging loose?

As we got closer to Mazatlan, the wind picked up.
And picked up some more.
Awesome Jim had put a 2nd reef in the main when we first pulled it up "just in case".
Well, helps to listen to the weather forecast!
I was happy to have that 2nd reef in as we ended up with 20-25 knots of wind on our port bow.
We were still making good time even with the wind chop and seas and dropped anchor at Stone Island twelve hours later.
All in all a good quick trip!

"Lovely Reta" had overnighted up the night before, and "Eyes of The World" was in the process of doing an overnighter and arrived the next morning.
So off to the beach to explore! 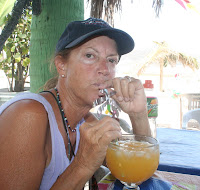 Debby had a fresh OJ cocktail with a cool monkey straw.
And now the straw resides with the rest of my party supplies! 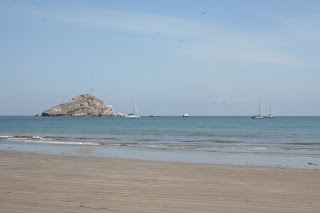 And since the water was a chilly 66-72 degrees we weren't sad to see no boogie board waves...

Lots of locals out having fun, as it was the beginning of Semana Santa ~ the party time around Easter.

Lots of local police too...

We were in search of beer for John and ice cream for me. 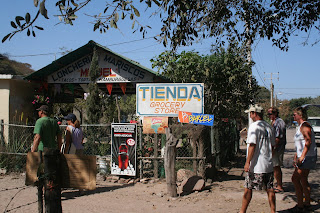 At the third tienda we found both.
John was happy.
I was happy.
Debby was not.
She picked out a pink fruit bar.
I was smart and picked out a white one, knowing it was coconut.
Pink could be anything.
Well, it was really, really icky.
The guy in the store thought it was chermoya chili.
Or maybe chayote chili.
Whatever.
I tried to feed it to a street dog and the street dog wouldn't even eat it.

The area around Stone Island was a lot bigger than I had thought.

I thought it was just palapas on the beach, but there were beautiful vegetable gardens, houses, tractors, horses, chickens and even a pig sleeping under a tree.
Posted by Jim and Heather on Meerkat at 10:43 AM