What a great day!
Marc and Kelly and dog, Tinkerbell showed up in their dinghy.
We played with them for most of the afternoon.
Then arranged dinner on "Meerkat" with them.
Jim had made his potato salad and I had several fresh ears of corn.
Marc and Kelly were bringing fish.
Uh fish?
Jim wanted to know who eats fish on 4th of July...
What about the hamburgers?
Or even hot dogs?
Fish?
Well with their excellent marinade on those giant chunks of tuna and some smoked fish on the side, we now eat fish on 4th of July!
My cousin, Julianne came for the night and Monte of "Heavenly Star" came for dinner, but didn't want to get stuck in the traffic, so headed out early.
We piled into two dinghies and went out into the bay.
We could see five firework shows!
Four were on barges in the bay ~ all synchronized! 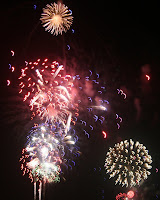 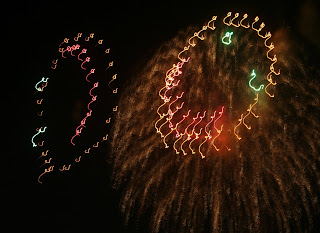 And happy faces!
How do they make those?
Too cool.
Posted by Jim and Heather on Meerkat at 7:33 AM

Labels: fish it's whats for dinner

Happy good weekend!.. Hear you're in San Diego. Spoke to Tim a bit. Dolphin video is coming to our site, but you know these "editors" who want to edit the video instead of posting the raw video.. I should have it in a day or so..LOL. Be good!