Off To Tenorio ~ Drive Day

Tenorio National Park ~ the one that no one's heard of.
Not in the guidebooks.
Not really on the map.
However, the map is how I found it.
In researching our trip, I wanted to find three or four inland areas to explore.
Inland areas that were not too far apart.
Ones that conveniently divided the driving into four non-strenuous days.
Okay, we had Monteverde, had Arenal, Poas... what else is around...?
Tenorio Volcano National Park!
Where the aqua blue Rio Celeste is!

So up, adios to Monteverde and Carlos and the monkeys at The Quetzal Inn.
Up the hill to the "not the highway" gravel road.
A stop at Don Juan Coffee Tour to buy green coffee beans and who is that in the info booth?
The long haired frog tour guy!
That's two times in Monteverde we ran into people we had met before!
I love how my small world encompasses other countries... 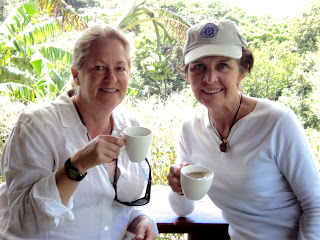 Then to Tilaran.
Fuel (that was fun).
And on to the South side of Lake Arenal!
Where the Longhorn Bar and Grille is conveniently located.
Not open yet, but the owners were happy to sell the boys some Costa Rica microbrews!
And I got to pet the puppy with the largest feet in the world... 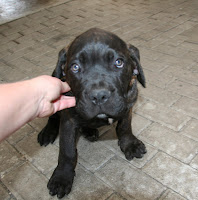 So we were all happy!

But not as happy as we were when we got to drink real microbrew beer at The Tilawa Hotel and Microbrewery. 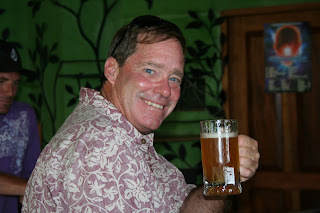 Jim was really happy.
Susan was happy watching us.
Lots of dirty barefeet.
Dreadlocks.
Hippie chick clothes.
"Dude!"
"Cool!"
and hand rolled cigarettes...
And why was this?
Costa Rica's version of Burning Man was to be at Tilawa in a couple of days.
Lots of "Dude's you sticking around?"
"Uh no".

Back on gravel roads.
Past the huge wind generators.

Past a billion baby cows.
Horses.
More baby cows.
Moo.
And finally on the paved road to Bijuaga!
Next stop ~ the small town of Bijuaga, rain and Tenorio National Park.
Posted by Jim and Heather on Meerkat at 9:14 AM