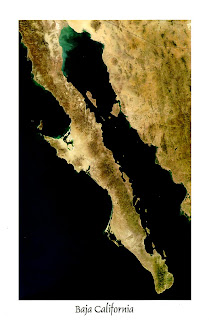 Amazing where cell phones work now...
Jim called me at lunch from off of Cedros Island - they must have a cell tower on the island now! When we took "Thistle" down Baja 9 1/2 years ago, there was no communicating except by single side band or ham radio.
Cedros is the big island off of the point & Turtle Bay is the horseshoe shaped bay to the Southeast of the point.
Along Cedros "Guavi" had about 20 knots of wind on the beam and was motorsailing along nicely. Jim said they had about 5 hours to get into Turtle Bay.
Then he called me tonight too! So they must have cell phones in Turtle now... The pangas now bring fuel out to the boat, at the same price as the pier, so none of that backing down against the pier stuff or jerry jugging it in the dinghy anymore! They fueled up and changed the oil and are ready to take off in the morning. They were bar-b-quing a tri-tip and were going to open one of the mystery gift bags tonight. Then sleep. I searched through my old cruising photos and found none of Turtle Bay, so scanned in a Baja postcard for today's photo!
"Guavi" may stop in Bahia Santa Maria or may continue directly to Cabo San Lucas. So it may be a few days until I hear from them again.
Posted by Jim and Heather on Meerkat at 7:47 PM

Glad to hear they made it to Turtle Bay. The weather maps didnt look all that inviting. It's warm water the rest of the way !