Got up & did the am coffee thing. Jim searched the internet for car rental and hotels near La Fortuna and Volcano Arenal. We had the girl at the front desk call for a car and within an hour had a Toyota RAV4 4wd delivered to our hotel! We re-packed all of Jim's stuff and squished his foul weather gear and sweatpants from the trip down into his two duffle bags.
Ok, this is what our room looked like when he was internet searching and I was attempting to re-pack eight weeks of clothes into a few bags...

We filled the back of the car and put Alan and Ariel into the back seat. Ariel had his propane tank to pick up near Liberia, so we gave him a ride. Said our goodbyes and thanked him for this wonderful opportunity, his incredible hosting and all the fun! Then down the Panamerican Highway towards Canas to the turnoff to Arenal. But first a quick stop for breakfast at the small round place in Bagaces!

We drove up some hills to a crest to our first view of Lake Arenal - a man made lake that is famous for windsurfing and is the largest lake in Costa Rica! 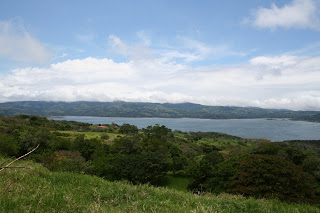 The drive around the lake was amazing! Green and completely overgrown with jungle!

The road is a two lane road, but turns into a thin one lane road whenever it has to cross a stream. There were all kind of incredible trees with orchids, vines, birds and loud cicadas.


As we got closer to the East end of the lake, the clouds starting filling in and the rain started.

As we drove across the dam it started dumping on us!

We drove along the base of Volcan Arenal and were amazed at the number of beautiful "bungalow" and "cabin" style hotels. Jim had a particular one in mind that he had read about on the internet, so we drove into the small town of La Fortuna (down a one way road the wrong way for about 50') to get an idea of the area, then drove back along the road on the hotel search. We checked out one that was "ok" then continued on to Hotel Arenal Manoa - good choice Jim! The hotel is down a gravel road a little off the beaten path (something we like!) and was worth the extra drive. For $110 a night (including a wonderful breakfast) this was the view from our bed! 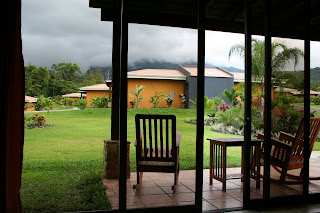 Each bungalow has two rooms - we had the one on the left and Alan had the room on the right.

The bathroom and shower sold us...

Jim and I got our bathingsuits on and started the short walk up to the bar and pool area. It started raining as we were walking up the road. 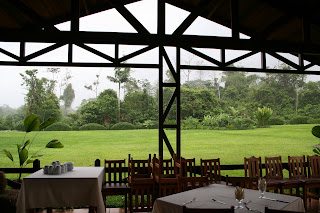 And started really raining once we reached the dining room and bar!


Danny the bartender gave us our wine and beer in plastic glasses so we could take them between the raindrops to the pool.

Luckily the pool had an awning over the swim up bar area, so we had a place for my camera and our towels, because then it started to POUR! 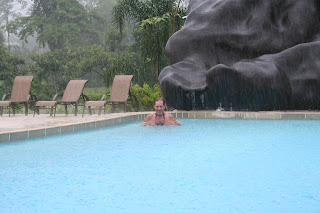 Alan finally realized where we were (maybe he had to take a geezer nap first?) and met us in the jacuzzi.

We only saw two other people around the pool that afternoon. We could hear monkeys and cicadas in the trees around us. It was just incredible! 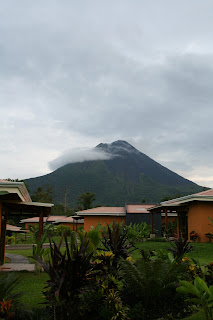 The clouds would come in and out and cover up the top of the volcano. The girls we met in the jacuzzi said someone had seen a red flow of lava in the middle of the night the night before. Alan saw a puff of brown smoke at one point. Of course these stories made for volcano eruption, pyroclastic flow and lava nightmares for me the entire night...


Jim and I took a walk up the gravel road behind our hotel, where we saw a beautiful garden area and what they call "living fences". 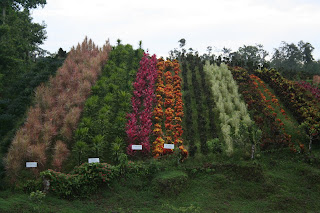 The fences are tree limbs they plant along the fenceline. The tree limbs continue to grow on their own and also attract orchids and bromelaids - they turn into trees themselves (living fences!).


The grass area had lots of toads at night that would sit under the lights and catch bugs.

We had a great dinner at the hotel restaurant - a buffet as there was a tour bus in (never really saw many of the people)! 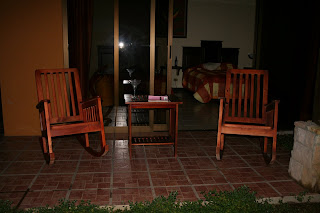 And then relaxed on our patio watching the toads and hoping for a little red lava flow...
We told each other that if we woke up at all during the night, we were to look out our sliding glass doors at the volcano - if we saw anything red we had to wake each other up!
Posted by Jim and Heather on Meerkat at 8:33 PM