Well, we can't really call them that anymore, as they sold "Different Worlds"...
So we will have to call them one of our nicknames for them:
"Strange Squirrels" or
"Squirrely Squirrels"!
I think we stole the "Strange Squirrels" name from Dan on "Etak".
Al & Debbie are some of our many great friends from cruising. And they are SO good at keeping in touch and coming by for a few days as they travel back & forth. 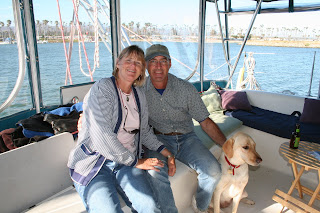 This time we got to meet their dog, Lucy!
She enjoys the finer things in life, such as traveling, boats and Sierra Nevada Pale Ale! 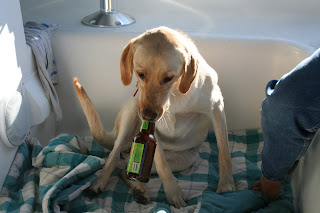 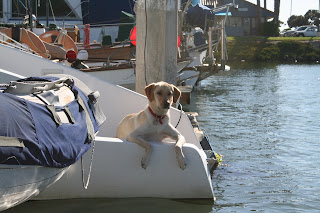 Posted by Jim and Heather on Meerkat at 10:08 AM No comments:

Island Trip with Chris & Lorry of "Hiolani", or "Traffic Jam in the Channel"

Our friends, Chris & Lorry spend 6 months in Barra de Navidad, Mexico (see posts from our time in Manzanillo) and 6 months working in the States. They have an older catamaran, so we wanted to take them out on our cat.

It was pretty foggy in the morning and the ship traffic was unbelievable!
More than we have ever seen!
We had to stop for Southbound Ship #1:

Then powered up to get behind it and in front of Southbound Ship #4:

There was even Southbound Ship #5, but I was sick of taking pictures of ships by then.
Chris did get this shot of another sailboat that had to play "Saturday Morning Dodge-the-Ships" too! 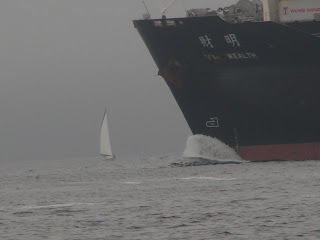 I've never been so happy to get out of the shipping lanes!!

Headed up to Prisoner's and were just anchoring with "Islander" came in to unload passengers on the pier. We heard a familiar voice yelling over to us - Ms. Wiline Holien (or better known as Cherryl)! Dave, Cherryl, Pete & Tracy were on board. Cherryl of course had her crew do the "ice cream delivery thing"! 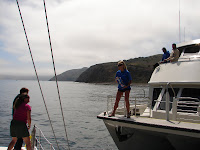 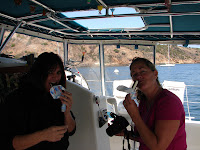 We are SO spoiled! We ate them quickly as it was pretty warm and we wanted to go over to the pier to say hi to the gang and thank Cherryl for the ice cream sandwiches. Turns out the four of them were on their way to the cabin at Del Norte for a few days.
We had fun watching Daveyboy back the Jeep and trailer down the pier (better than me or Cherryl trying it!). 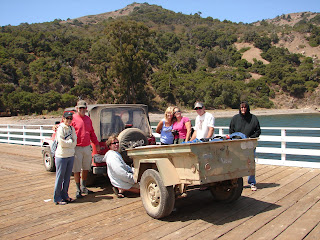 The wind was starting to pick up and it was still pretty early, so we decided to sail down the front side to Yellowbanks. We pulled up anchor and pulled out the headsail (not going to fight this main for such a short trip) and sailed down island. We saw this great traditional "island" catamaran off of Chinese. 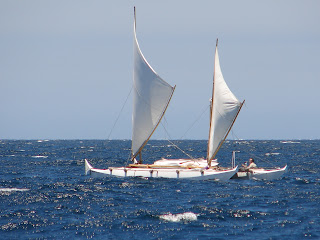 Back to the calm & sunshine of Yellowbanks!!
Warm enough to jump in! 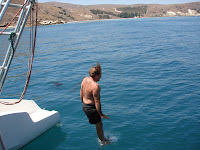 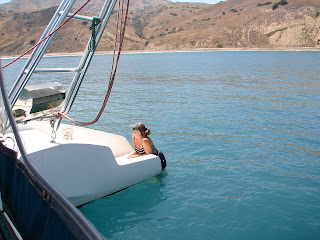 Lorry & I kayaked over to Smugglers and watched the baitfish jump, then time for some afternoon vino - "Eagle Castle Syrah Rose"! 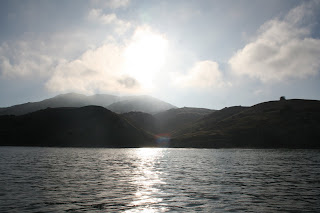 The guys went fishing and the girls made stuffed jalapenos. I took a few over to Rick & Karin of "Eyes of the World" and invited them over for a drink. We enjoyed the rest of the afternoon and evening, then had a tri-tip dinner. 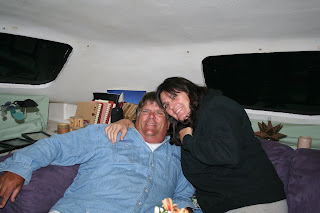 Then early to bed.

On Sunday morning I made a big "cruiser breakfast" of potatoes, red bell peppers, onions, sausage, scrambled eggs & watermelon - quite the feast. Lorry cleaned up - she cleaned up the night before too - thanks L!

Then headed out to the gap fishing grounds. Not much luck, but Jim caught a giant kelp and it's rock!

Then pulled up & out the sails and headed home. And for once NO SHIPS!!
Nice sail back, then nice dinner out at Casa de Soria. It was really fun to share the boat with other catamaran owners. Another great weekend trip!
Posted by Jim and Heather on Meerkat at 8:26 PM No comments: 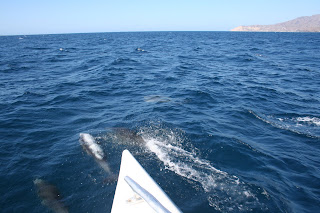 Time to take Mike & Cyndi out to the islands overnight!
Got up early Saturday morning and watched race 6 of the America's Cup (not the results we wanted...), as Alingi is now 4 and New Zealand is now 2.
Motored out towards the gap between Anacapa and Santa Cruz, pulled up the main & unfurled the headsail and dolphins came to visit!

Got the boat up over 11 knots!

And enjoyed the flat, warm sail
(& some mimosas!)

Headed out towards the "mako spot" and trolled along with no luck. Then motored over by the kelp beds West of Yellowbanks and anchored. We put all four kayaks in the water and kayaked around and through the kelp beds. We saw LOTS of white sea bass!! Huge schools of up to 40 fish and lots and lots of giant schools of bait fish. Then we motored over to Yellowbanks and anchored way outside.
It was really hot! 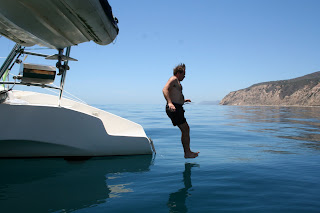 So three of the four of us jumped in.

Then time for some "Celebration Rose"! 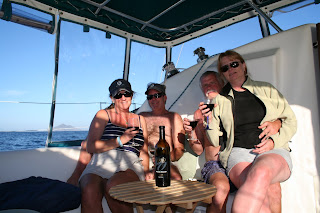 We enjoyed the rest of the afternoon and tasted some other wines from our last wine tasting trip the four of us took. Then bbq'd veggies, corn & linguisa (sausages).

And someone else washed the dishes!

We had a beautiful full moon and even one shooting star. We all slept great (except the slapping of the leftover waves on the stern got a little old...)

Had coffee in the cockpit on Sunday morning and had to hang beach towels from the bimini to give us some shade! I made potatoes, bacon & eggs for a big "cruiser breakfast", then we had a surprise visit from Jon & Chris Greene on "Rather Be Lucky", who came by on their way to go fishing. 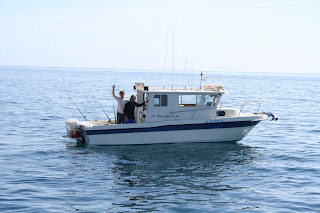 Amazingly still and hot, so Cyndi & I kayaked over to Smugglers and around the anchorages. 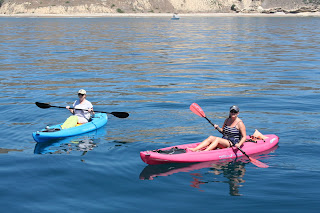 Jim & I jumped in again to cool off and I even swam up under the boat to the bow and back - got a little chilly on the way back...

Saw Don & Becky on "Reaching" and the Killions on "Tina" outside of the harbor. Back to the dock where the neighbors grabbed our docklines (we love our neighborhood!) and enjoyed the rest of the hot afternoon in the harbor! 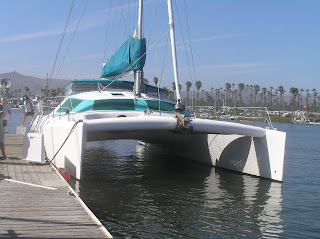 And Mike & Cyndi enjoyed their first overnight at the Islands!
Posted by Jim and Heather on Meerkat at 8:37 PM No comments: