Update on "Question of Balance"

Our next door neighbor is the local Vessel Assist.
So we get to hear all the stories of groundings, rescues, sinkings and stupidities.
Seriously, don't do something stupid off the coast of "here" or we will hear about it. 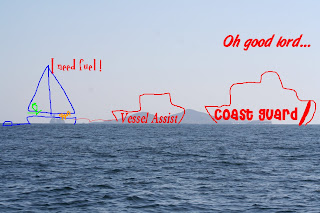 Somewhere off the coast between Catalina Island and San Clemente or San Diego or some San place, "A Question of Balance" hailed Vessel Assist for fuel.
Uh... uh oh.
They do sell fuel at Catalina.
Ok, TANGENT!
We actually forgot to fuel up once at Catalina and ran out on the backside of Anacapa...
DOH!
Ok, so I take that "Cause we never do anything stupid" line back.

So our local Vessel Assist neighbor hears the VA side of the vhf call and calls VA South to explain the deafness, the cluelessness and the old dirty, grumpy man situation.
Apparently they take him fuel, however he is disoriented, not sure where he came from and cannot tell them when he left.
So VA calls CG.
Yes, the US Coast Guard.
Who then tows him to San Diego.

Labels: better there than here

Helps to have the best view in the harbor too... 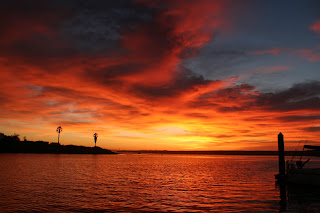 Posted by Jim and Heather on Meerkat at 9:08 PM 5 comments:

Labels: winter is good for something

So sitting over here in the cheap seats.
"Last Chance Marina".
Where I pretty much spend my entire life...
Home, work, home.
We get beat up when we have strong prevailing winds.
Before this last trip to Mexico, we were parked across the channel at a different marina.
We used to sit and watch the boats in the cheap seats take the brunt and slop and crap in strong prevailing winds.

And laugh some more and think "fools"!

Well fast forward and now we are the ones getting beat up.
Except...
In the case of EAST WINDS! 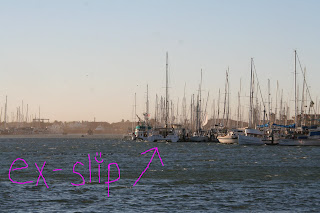 Now we are protected and they are getting the wind, slop, crap and dirt.
And the occaisional un-furling headsail. 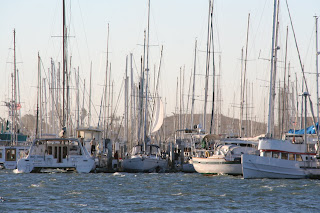 Posted by Jim and Heather on Meerkat at 8:54 AM No comments:

Labels: be careful what you laugh at 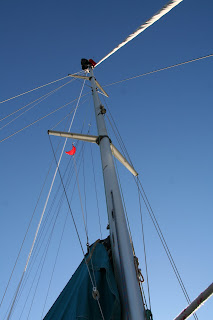 Flipped the halyard around the topping lift.
All good.
Better Kim than me.
Yep, friend Kim in high places.
Posted by Jim and Heather on Meerkat at 6:10 PM No comments:

Labels: he forgot to take pics

"A Question of Balance" on her way...

Too bad we didn't put a "Spot" on this old man's boat.
Sure would be interesting to see how far he gets.
Where he ends up.
I believe he put his last boat up on the beach somewhere up North. 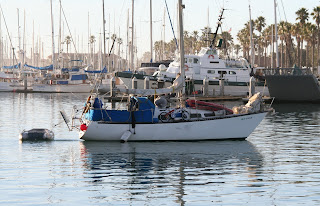 Sorry, Dr. Phil, but if you would just put your hearing aids in, I think this 90 days of you driving us crazy could have been avoided.

Showers and laundering your clothes would have been good too.

Off to the Marquesas...
Or quite possibly Channel Islands Harbor. 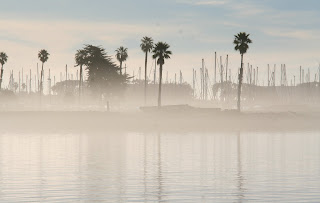 Well, wherever he ends up we wish the marina staff patience.
Patience, the ability to repeat everything said, a lack of sense of smell and another boat scheduled for that slip in a few days.
We wish Dr. Phil clean clothes.
Success in getting somewhere.
We wish his dog would get a bath.
And that he remembers to put in his hearing aids.
Posted by Jim and Heather on Meerkat at 7:48 AM 4 comments:

Tall Ships on a Stunning January Day in Ventura

A little East wind in the morning to warm and dry things out.
A Saturday.
No place I have to be.
Nothing I absolutely have to do.
At least 75 boats out and about, including two tall ships! 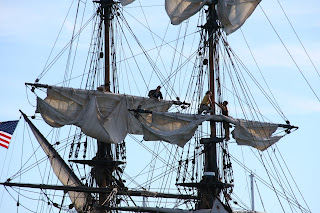 Whoa... they sure have a lot of shrouds, stays, halyards, lines and lord knows what else. 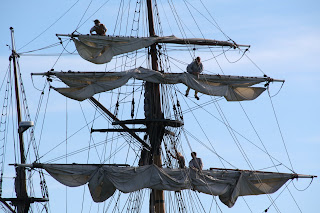 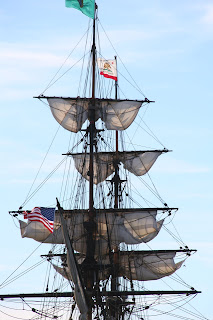 Now if this weather will just hold...
Posted by Jim and Heather on Meerkat at 4:54 PM 5 comments:

Labels: please don't shoot the cannon anymore though because it makes me jump 16' into the air each time thank you very much

Everyone repeat after us:
Awwwwwwww......
Well, everyone who knew Cruiser can say awwwwwwwww...
To clarify: "Toshal" Cruiser, Alan and Susan's dog, not "Lovely Reta" Cruiser, John and Debby's dog.
Well, we can all say awwwwww about him too.
But her?
Awwwwww... "her" was our favorite. 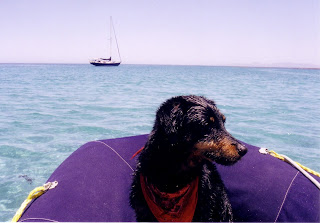 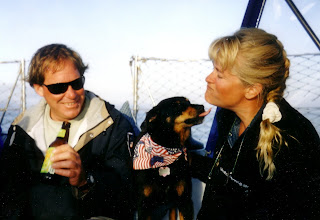 Weeks on "Thistle".
Her own hull on "Meerkat".
Hanging on "Toshal".
Taking over "Star Song" and sending Star Song's cat to "Toshal".
Dinghy rides.
People food.
Bandanas around her neck.
Bandanas often used as her leash.
Licks.
More swims.
Waiting for the word "ok" to jump off of the dinghy.
Mazatlan.
Melaque.
La Paz.
Sea of Cortez.
Newport Beach.
Ventura.
Sitting in the baby chair in the back of the car.
Sneaking her into the v-berth to sleep.
Swimming alongside my kayak.

Wow.
What a great dog.
Our little dog buddy. 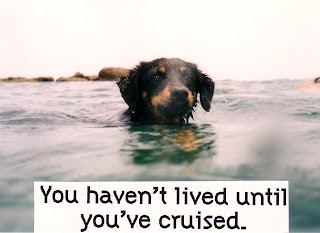 Posted by Jim and Heather on Meerkat at 7:57 PM 6 comments:

Labels: apparently toshal and meerkat are all going dog shopping after costa rica

Boat Renaming Ceremonies or Burning a Monkey on the Foredeck

All boaters know of the superstitions of re-naming a boat.
It's bad luck!
The weather gawds are going to get you.
You will sink.
You will spontaneously combust.
Your boat will disentegrate within 15 minutes.

Sometimes we have to supercede the superstitions.
Go with the flow.
Do a dance.
Waste some champagne.
Hire a preacher to bless the boat.
Burn a monkey on the foredeck.

Sometimes boats do have to be re-named.
Well, actually a lot of times.
Take for example the following boat names we have seen:
"Salty Johnson"
"Wet Dream"
"Circumdecision"
"Too Sassy"
"Sail Bad the Sinner"
"Breaking Wind"

Remember, someday you might have to say this name in a bit of a panic to either Vessel Assist or gawd forbid, the Coast Guard!
You want the Coast Guard to take you seriously.
You don't want them to start laughing when you say "Makin' Luff".
Try saying "Hot Ruddered Bum" three times.
Or requesting help over the SSB radio by saying "My Assiss Dragon".

Remember when cruising, these boat names actually become your last name.
Forever...
We are still known to some people as "The Thistles"...
and we haven't even owned that boat for the last six years!

Speaking of "Thistle"...
Her ex-name was removed within 15 minutes of pulling into our slip. 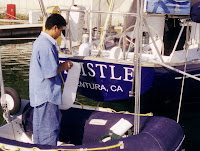 Yep, the day we purchased the boat!
I felt by NOT changing the boat it would be bad luck.
Really.
I was not going to leave the harbor in a boat named "Rogue Wave".
In fact, I didn't even go on the seatrial (but not for that reason).
A ceremony?
Not this time.
Not necessary.
A simple scrape off of the name and slap on a new one.
Twelve years of better luck.

Next boat.
"Two Dolphins"
Ugh.
Boring!
A ceremony?
This time it was the simple "Blue Tape" ceremony.
Tape over the old name.
Tape on the new name. 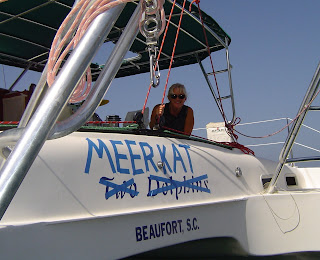 Worked for us.
For about two weeks...

Until we got our real name. 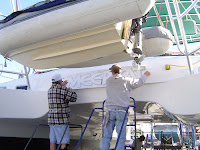 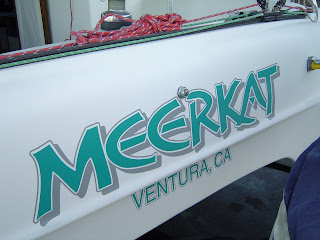 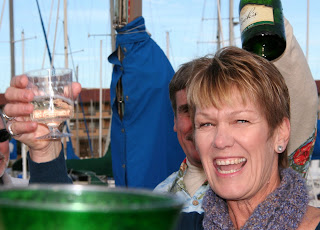 Well, actually several.
I did hear some mumbling from the guests about not realizing the ceremony was going to be a drinking game... 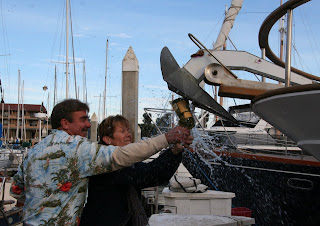 No foredeck dancing.
No preacher's blessing.
No monkey burning necessary.
Just simple ceremonies all in our own individual ways.
Posted by Jim and Heather on Meerkat at 8:48 PM 138 comments:

Labels: the weather gawds would be proud

Light At The End Of The Proverbial Rain Tunnel 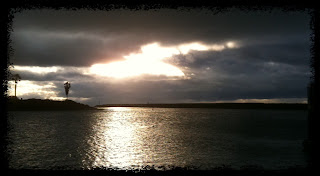 Which means here comes the ripping winds...
90 mph winds blowing snow on the Grapevine.
Snow at Lake Piru.
And some crazies zipping around the harbor on a Hobie cat today...
Posted by Jim and Heather on Meerkat at 5:37 PM 2 comments: 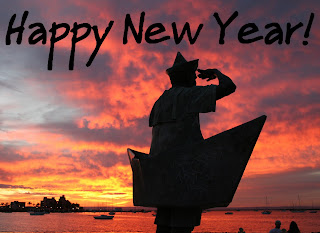 Labels: where i wish i was
Newer Posts Older Posts Home
Subscribe to: Posts (Atom)