Adios Paul Newman... Who Was Once in My Hotel Room

Jim always tells me to be careful how I say, "I was in a hotel room with Paul Newman".
But it is nice to say...
And he was in my hotel room.
Along with his wife.
Along with my husband.
And me.
The four of us.
Total innocence.

We were sorry to hear he passed away...
Adios Paul! 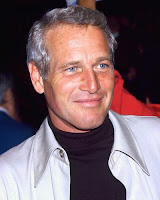 So now for the story of "I was in a hotel room with Paul Newman!"
It was the first time we had stayed at The Old Mill Hotel in San Quintin, Baja California about seven years ago. We had driven out the dusty, dirty red clay road in our Nissan 4wd and pulled in to the courtyard parking area and parked the dusty, dirty red clay covered car next to the brick flowerbeds. We checked in and started carrying our bags up the stairs to our room at about the same time this beautiful, shiny brand new Mercedes parked next to our car. Hmmmmmmm... I thought that was an odd car to be driving around Baja, but to each his own. A very well dressed couple got out and started talking to us. They asked us how the rooms were so we offered to show them our room. They took us up on it. As I was putting our bags down, I focused on this beautiful lady in her non-Baja attire and talked with her. Jim apparently focused on the handsome blue-eyed movie star because he got to talk with him. The conversation was pretty much the two ladies talking and the two men talking. They asked us how the food was at the attached restaurant, to which we replied being our first time here we didn't know. They left our rooms and went to explore the hotel grounds and restaurant. Jim looked at me and said, "That was Paul Newman". I'm not exactly sure how I replied, but something like, "Well then that was Joanne Woodward and that explains the Mercedes and nice clothes". Then I said something along the lines of, "Crap, I should have at least looked at his eyes!"
So then a half hour or so later, we went to explore the hotel grounds and restaurant, and low and behold, at a table in the restaurant eating lunch, there sat Joanne and Paul. So I said to Jim, "I just want to see his eyes. Then I will know it is him. Let's just go ask, so how is the food? Paul will look up and I can look at his eyes, then we can go". But Jim wouldn't let me... He didn't want to bother them. I am not the fawning over movie star type, but they might have appreciated the non-fawning over movie star type of conversation.

Back to that "You only regret the things you didn't do"...

I would have just like to have shared a quick smile... 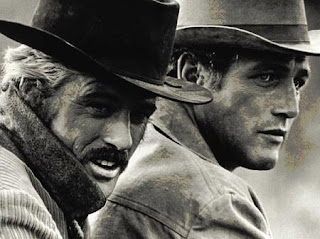 For you youngens, he is the one on the right.
The one on the left is Robert Redford.
We had this conversation at my old job about 6 months ago - none of the people under 30 knew who either of these great actors were.
They only knew Paul from his salad dressing...
Aaagggghhhhh.
Anyway, that photo is from "Butch Cassidy & The Sundance Kid".
A great movie if you youngens haven't seen it.
A more recent shot of the two. 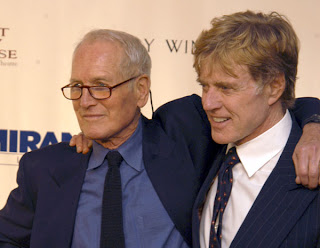 And Paul with his charming wife, Joanne. 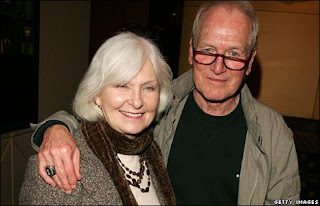 This is pretty much what they looked like when "I was in a hotel room with Paul Newman!"
Posted by Jim and Heather on Meerkat at 1:34 PM

That is one of the nicest stories I have ever heard.
How lucky you were.
And how lucky they were to be able to have a sneak preview of what the rooms were like.

Great story, and you should have taken the perfect opportunity to ask 'how's the food?' They probably loved the fact that you treated them like regular folk.

That was sooo cool Just like Paul himself. We got to meet him at a race 1,005,045 years ago. Of course he wouldn't remember, but I sure do even have a pic to prove it