Friday January 2nd, 2009
We had a beautiful "red skies in morning" sunrise as we left La Paz at first light. 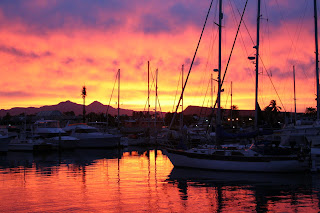 But there was no "sailors take warning", as we had a smooth motorsail out of La Paz, through the San Lorenzo Channel, down the Cerralvo Channel and in to Bahia de Los Muertos.
It was cloudy and cool.
Hmmmmm... must be winter.
Oh yeah, it is January.
In and anchored at Muertos at 2pm.
Saw the mega yacht "Triton" there ~ wonder if U2 was aboard...
Then another mega yacht came in...
Then a mini mega yacht.
Talk about being outnumbered!
Worked on raising our cholesterol and had bacon cheeseburgers for dinner.

Saturday January 3rd, 2009
The 3 year anniversary of my sister passing away...
I did ok this year as my mind was on the passage.

Didn't mean I didn't miss her, I just didn't dwell on it for hours and let it get me down.
But look how cute we were when we were little! 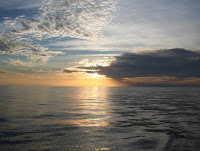 Watched the sunset and prepared for the night ahead.
Made pork tenderloin and let everyone help themselves.
Set up our 2.5 hour nightwatches.
Amazing how fast a 2.5 hour watch goes by after those years of 4 and 5 hour watches!
And quite lovely with a mp3 player instead of two cassette tapes that I would listen to over and over and over and over and over...
At some point here it turned in to:
Sunday, January 4th, 2009
Watched each ferry cross above us.
Then here came the sun with the shore of Mazatlan not far behind! 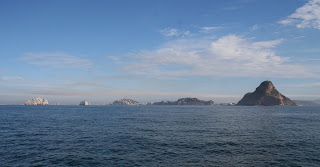 In to The Old Harbor at 9:15, so a 25 hour crossing!
Beats the old days on "Thistle"!
Then the hard part... anchoring.
It took us 3 tries to anchor.
That was a first!
The second time we pulled up some ratty, nasty old fishing net.
Oh, now we got why our anchor wasn't setting.
Third time was the charm.

Oh, look what followed us in a few hours later, "Turmoil"...
They had to call Port Control and have a captain come out.
Wonder how much they get charged for that?

Then we watched the goofy double and triple decker tourist catamarans go in an out. 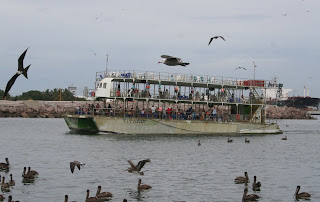 Gee, makes you want to run right out and go on a booze cruise in Mazatlan huh?

Made cream cheese stuffed, panko crumb encrusted chicken, along with mashed potatoes, fresh green beans and salad.
YUM!
To bed early for marathon sleep.
Posted by Jim and Heather on Meerkat at 12:49 PM

Sounds like you guys had a great trip over. Glad you decided to go over to the marina and be safe. That anchorage always did scare the hell out of us with all the dragging. You guys sure are making us jealous and thinking of the old days with you. Tell Alan and Susan hi for us and we know you will have a blast. I guess we'll just have to settle for our old video's of the Coco Open.

So glad you are there safely and had such a great crossing. 2 1/2 hour watches sound like heaven to me!

I can't believe - Don and Lenna! How I would love to see them. Can you get their email or give them ours? You must be going to have a dinghy raft-up if they are there! They are famous for it.

Enjoy, enjoy and think of us!

Glad you made it in safely and so danged quickly--it takes us over 50 hours to do the same. "Thistle" would leave us in her wake.

The yogsters in La Paz miss you!

That picture of you and Donna was before mom got ahold of you and cut your hair funny like the rest of us! The horrendous 'pixie cut' that made us look like dorks instead of pixies!

Loved Elizabeth's comment about the pixie haircuts.......funny, but she wanted her bangs cut to go up at the sides like a the line of a certain car's rear deck, which you all called "the smiling car"!!

How many hours did you all sleep??

Glad to know that you guys made it just fine!!! Look your family is actually commenting on your blog. I have been really sick which is why I had not been readin it much, I have spent to many hours on the couch.

Love you both lots!!

the food sounds amazing. almost stopped reading this post when you were talking about your sister passing away because it made me so horrified just thinking how devastated i would be if my brother was gone. but i kept on after a good cry. im so happy you guys are up and moving around! yay! and let me tell you.... key west is full of those cattle boats with tourists wasted aboard.... i used to work on them! ok. time for bed. be safe out there! xo

So nice to hear from everyone!
Yep, Don & Lenna, Glen & Glenna!
Erin - the poppyseed cake was excellent!
Dorks we were...
Thank God I didn't want my hair cut that way...
That tourist cat is an accident waiting to happen.
Sorry you are sick Jen.
Thanks Jolea for everything :)