We are in Mazatlan!
Let's go to shore!
So we had coffee and made the mistake of allowing Jim to have Frosted Flakes...
Just a tad too much sugar for him.
So got him all jacked up and dinghied in to the dock at Club Nautico.
More like Club Bosnia...
Old rickety docks with old rickety heads and showers.
But the dinghy would be watched.
Took the green Sabalo Centro bus into town at about 4 mph...
Uh ~ we could walk faster than this.
Then an ancient, wrinkled, clothes-layered old woman got on board and proceeded to lecture the driver about driving while listening to music on headphones.
The headphones came out of the ears, the bus driver tried not to laugh, then he shifted into 3rd and possibly 4th gear and we were flying through town!
The ancient woman continued to talk the entire way and even while she slowly climbed down the stairs at her stop.
Laughter was heard throughout the bus as she left...
Up to Marina Mazatlan where we surprised Don and Lenna of "The Grand Wazoo", formerly of "Windward Luv"! 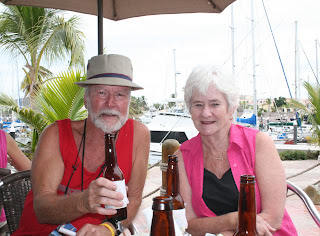 They hadn't changed a bit!
Had a nice visit with them over a few cervezas and decided to arrange for a slip for a few nights.
Back on the bus.
Pretty much running from the bus stop to Club Nautico as a few of us had full bladders.
This is when we got to see the lovely heads up close...
A view of the old harbor, with "Meerkat" anchored in the back under the word "Mexico". 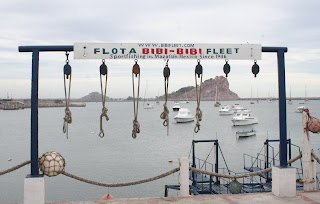 Back to the boat for naps (guys) and reading (girls).
Made burritos out of "Alan's Beans" and ground beef - yum!
Then a few games of "Chicago" ~ a dice game that Alan and Susan re-teach us each time they come down.
To bed around 9 pm.
At 11 pm, I heard the horrid sound of a headsail unfurling.
Oh please do NOT be us, but I knew we had plenty of tight sheet wraps on both sails.
It was the boat behind us that came in and anchored after dark.
By the time I got up and got to the vhf, they were dragging.
Jim sounded the airhorn, I called on vhf.
They didn't respond, but Port Control did.
I explained the boat was now in the shipping channel, heading to the rocks on the jetty.
Ick.
Port Control said he would call the Port Captain and send a boat out to assist.
By then the owners of "Boat A" were up and working on their problems.
Then "Boat B", up to the port bow of us dragged into "Boat C".
"Boat B" was re-anchoring to the starboard of us (oh please not to the front of us!), and "Boat A" was still trying to furl their headsail.
"Boat A" could not get their sail furled in the wind, so finally went outside of the harbor so they had more room to work with.
"Boat A" ended up dropping their headsail (smart move!) and coming back in and re-anchoring.
This all took about an hour and a half.
So time for anchor watches!
Jim stayed up until about 2:30 when he felt it was calm enough to go to sleep.
Alan still had the heebie jeebies, so got up at 3 and was still up when I got up at 7.
And of course it turned in to:
Tuesday, January 6, 2009
while all of this was going on.
Enough of this and it was to blow again that night.
So off to Marina Mazatlan for us.
Slopped up the coast to the entrance.
Amazingly enough the entrance was fine!
Waaay better than that time we surfed "Thistle" into the harbor!
Had assistance into our side tie, where we tied between pilings and a piling with razor sharp metal sticking out.
Maybe I can find an old tire to donate to the marina to fix that problem!
Showers, internet, laundry!
Then Tuesday pizza night with Wally, Linda and Angel of "Andanzas" (formerly of G Dock) and all their friends from their dock.
A nice sunset, loads of visiting and chatting and once again small world stories! 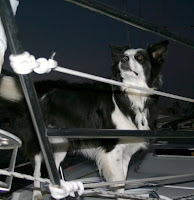 Anyone from G Dock recognize this dog?
She recognized us!

Guess who else is here from the old days?
Glenn and Glenna from "Califia"!

Then we talked to a guy who had sailed on Kent Stokes' Columbia 50, "Magnet".
We had met Kent back in 1998 in La Paz and in 2000 in San Juanico.
He sailed a lot with Ed, who we met in San Juanico on Kent's boat.
Ed then had his boat "Carefree" right nest to "Thistle" in Ventura back in our C Dock days.
Turns out Jim finally realized he had met this guy with Ed in Hualtulco when Alan and Jim were on Ariel's boat, "Guavi".
Did everyone follow that?
Small sailing world once again!

A nice after pizza party visit on "Andanzas", then back to "Meerkat" for a wonderful night's sleep!
Posted by Jim and Heather on Meerkat at 6:13 AM

Labels: give us 15 minutes and we will figure out how we know you

Charlie wants to know how the frosted flakes compared to the macho burrito;D
Great story.

It's been a long time but I'm back and will spend the next week or so catching up on all your stories.

Happy New Year to you both!
Big hug
Maria

I am so happy but the title of the post made me a little feisty and scared for ya!!! xox

How long did it take you to get from La Paz to Mazatlan?

Yea Maria! Hope your travels were AWESOME! Big hug right back at ya!

Sorry to scare you Slojolea - we have an 88 lb anchor so we are usually good, but talk about crappy holding...

25 hours to cross from Muertos to The Old Harbor Simon. Welcome - who are you?