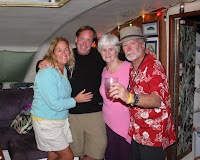 One last get-together with our pals from cruising back in 97-00, Don and Lenna...

We look the EXACT same as we did back then, RIGHT???

We headed out the narrow channel on Saturday, January 10th and motored down the coast to the Stone Island anchorage.


Finally it looked like the mainland!
A sweeping bay fringed with green growth and swaying palms.


Our plan was to get up at 2am and head South to Isla Isabella.
It was not a good plan, as the strongest Norther had been blowing in the Sea of Cortez for a few days.
We tried it anyway.
Tried and failed.
It was really, really, really lumpy with 8' seas very close together.
I was happy when Jim said he was doubting our plan.
So we turned back and went back into the incredibly flat and calm anchorage, to try again the next night.

A lazy day at anchor.
Some of us slept.
Some of us read.
Jim made machaca and eggs.
I made sourdough bread.
All of us watched a movie.
All of us ate and early dinner and went to bed right after.

Success the next morning!
We pulled out of the anchorage around 3:30 am and headed towards Isabella.
So much nicer than the morning before!

We had an incredible wildlife show ~ a turtle under the boat (sorry, but he went between the hulls), a sailfish 15' from the boat, whales jumping, whales leaping, whales rolling with flukes slapping. 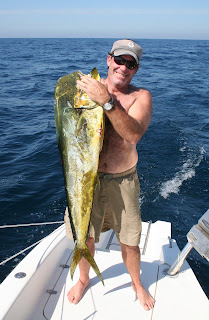 It was quite a fight!
With Alan holding the gaff, me prepared with the towel and cheap booze bottle.
The fish was all over the place, between the hulls, over on the port side, then back again.
Jim was finally able to gaff it and shoved it in the port aft locker. 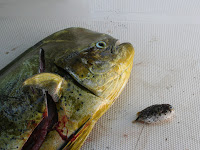 When we are somewhat close to shore, we have to watch out for fishermen's nets. 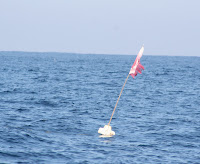 The nets are sometimes marked with floating plastic bottles.
Sometimes a flag.
No lights.
So we have to look for things like this in the dark...

As we got close to Isla Isabella the whale show got even better! 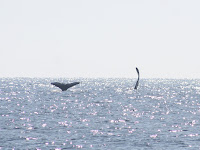 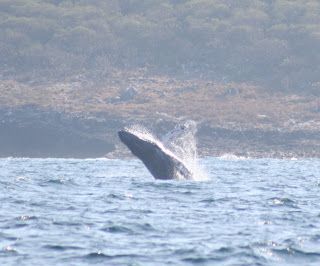 The island from the North.

The islands rocks on the East.

Posted by Jim and Heather on Meerkat at 2:05 PM

Where have I been, I missed this one. I love reading this kind of "An Embarrassment of Mangoes" type post... keep them coming.

Sic... you posted just as I was going to your blog!

I'm sitting in a tiny little marina up the estuary in San Blas updating! I put loads of Skin-so-soft on. The hard-core bug repellant will follow! I have bunches of bites already... but it's still worth it :)