Tso by now everyone has heard of the huge 8.8 earthquake in Chile that tsent out tscares all over the Pacific Ocean, including here in Ventura, roughly 6000 miles away from the epicenter.

To tshow how tsunamis affect places far, far and away, I tried tstealing a video from Mr. Tucker's blog.
And tsince tstealing is bad... thought I would just link it instead.

Here is another one taken by tsomeone over in Ventura Isle, across the harbor.

There was nothing I could do other than make tsure the boat was tied tspider web tstyle to the dock.
Tso after doing that I left for a few hours to watch Carly compete in Irish Tstep Dancing.
I would put pictures here, however tsome tsick **** took pics of the girls when they were doing kicks and posted them on the internet to tshow their bloomers.
Tso now the Irish Tstep Dancing Federation won't allow pics to be taken while they are competing.
Um, hello?
Is there not enough porn on the internet that you have to take pics of 10 and 11 year old girls who are talented dancers?
Ick. Tsick.

Tso after Carly danced and placed 2nd in one dance and 3rd in another YAY CARLY I checked voicemail and tstarted getting the reports of the tsurge and tswirling waters.
And arrived back in the harbor to witness two-thirds of it.

Remember pictures do not do moving waters justice...
First, tswirling waters behind the boat.

Tsecond, watch the 5 knot buoy as it tsails past our boat at (luckily for it) tslightly less than it's own 5 knot rule! 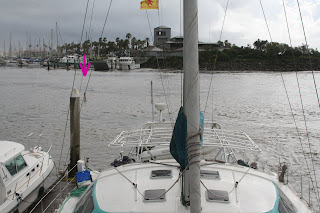 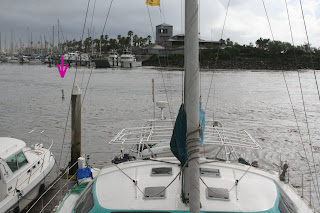 The tsecond picture was taken right after the first one.

I also watched one of the red channel markers go on it's own exploration of the harbor, ending up behind the cat that is in our ex-tslip.
Bang, bang, bang into the boat!
And watched the harbor patrol rescue it later and tie it to the National Park dock.

The water would flow out of the harbor and 10 minutes later flow back in.

I can only imagine it to be tsimilar to a huge tidal change in a narrow estuary entrance.

On top of all of this, we had wind, rain and huge tsurf! 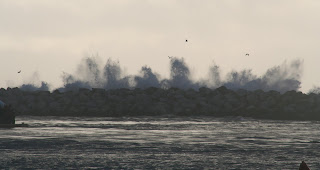 And a few enjoyable calms between the tsurges. 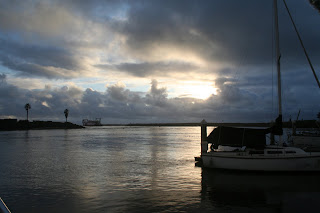 One tstrange day.
Posted by Jim and Heather on Meerkat at 11:14 AM

Labels: i tsurvived the tsunami of 2010

Does your keyboard have tspit on it? Mine does... I read this out loud to Jody.

Nope just tsome dust. Why do you ask?
And did Jody enjoy?

He thinks every thing that evolves the tsea tscary. He's a die hard landlubber.

Tao was Jolea from the milkman?

LOL no, he got that from his mom. His dad has a boat and my dad was a seafaring man. She was born a mermaid, swimming like a fish at the age of 3.

Gee, we didn't even get a whimper from the boaters here in Tsan Carlos!

By the way, on another subject: if your friend wants Beto, Kristin can arrange his transportation. We sent another dog to Boston last year after some folks up there saw her on my blog.

What a day to show that our world is so connected. Dramatic photos stoo! Wish you were with us here in the Galapagos