The Rest of The Epic Trip!

After a bottle of vino on la playa, we headed back to the boat.
I think we had some chili dogs or some such crap for dinner.
Something easy after motoring all day.

One Southbound cruising boat and two small fishing boats were in the anchorage that night.
And in the morning?
We were the only ones left! 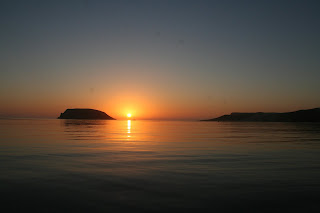 Ahhhh... the place to ourselves.

Which meant fishing in the dinghy first.
And catching a big halibut! 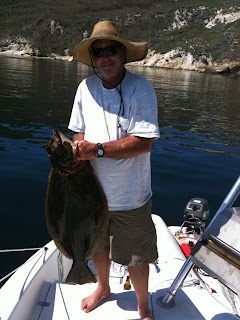 Then our own private beach!

No one around.
No boats.
No humans.
Just the locals. 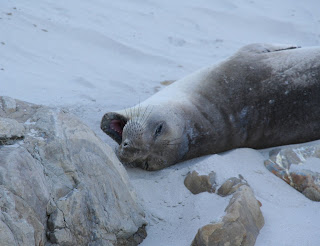 We meandered all over the beach.
Up the dunes to the foot of the canyon trail. 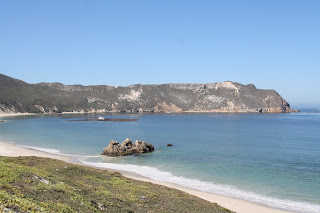 As all good meerkats do.

Next day two other Southbound boats came in.
And the big boys, "Conception" and "Island Packers" with 110 hikers.
Thanks for the warning Cherryl!

So a dinghy ride out to the point to say adios to the other locals.

And the juvenile sea lion gang that so wanted us to play! 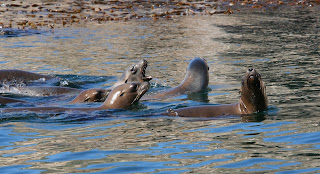 And then headed down the front side of Santa Rosa to meet up with singlehanding Stan on "Ebb Tide" and Dave & Cherryl on "Shining Star"! 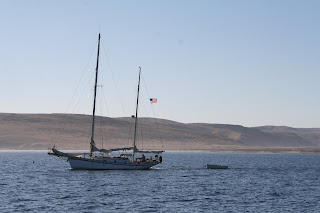 Did a "drive-through" in Bechers to make an attempt at waking up "Sneaky Pete" and "Veda L", but like all good fishermen were asleep...

Anchored for about a half an our by Skunk Point until the slop started coming in, then headed up the backside of Rosa to Eagle Rock and anchored in the calm anchorage!

Leftover halibut on "Meerkat" with Daveyboy and Cherryl Wilene Holien joining us.
I think Stan was out for the count...

Uh, what next?
To Johnson's Lee, another kelp filled spot, but still lovely and calm.
Except for the offshore 85 degree HOT down canyon winds we had!
Loved it!

And realized the Scottish Games were a couple weeks away, when we looked at our flag.

Where is Stan when I need him for the Stan & Heather's Museum Quality Flag Restoration projects, anyway?

Next drive-by was through Forneys on the West end of Santa Cruz Island.
A little lumpy, so headed down the backside.
Stan had gone ahead to Yellowbanks to shorten his singlehand trip home.
We checked out Malva Real, but there was only 2" of kelp free sand to anchor in.
Our anchor is bigger than 2", so down to Willows.

Watched a feeding frenzy between the two boats that consisted of sea lions, dolphins and a gazillion birds.


BBQ or something or other on "Meerkat" in the sweltering out of the canyon dry wind.
91 degrees at 8:30 at night?

So when the sun finally came up, and we were 1000% sick of swatting kelp flies only to have the rest of their relatives show up in mourning 15 seconds later, we left.

But first we had to get our anchor out from underneath "Shining Star". 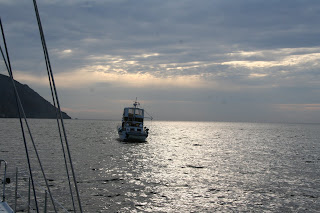 And stay out of the kelp.
I didn't do so great on the kelp avoidance thing.
Ended up sucking up kelp on both sail drives.
A little smoke.
A little bit of panicking.
A little bit of throttle.
And a lot of running on one engine.

East winds in the channel on the way home for an hour or so.
Enough to have our headsail out on our port side, which was weird as can be.
Then no wind.
Total calm.
Kelp flies joining us for the ride home.
Turned on the second engine for the parking job.
Glass of wine for me, beer for Jim and our dockboy, Stan.
Dinner, all good.

Posted by Jim and Heather on Meerkat at 10:43 AM

Labels: dear god is there a reason you put kelp flies on earth because no matter how much i think about it i cannot figure out why

Beautiful beach pics and such cute sea lions (until they take a bite out of you for getting too close that is!)

I just thought of something... our son Jeff was out in your area a couple of weeks ago! I don't know why I didn't have him get in touch with you guys.

Yeah well having a telephoto lens is a good thing.
Bubba was here? Where was he? We would have showed him the local something or other. Or fed him.