The cold that caught me earlier in the week caught Jim.
And put him down.
So Stan was my date for the day!
Stan, Mike, Bibiana and I hopped on our bikes and rode from the harbor to the fairgrounds.
Through The Keys, down the beach bike path, down the promenade ~ a super easy, flat, mellow ride!
Free parking right in front of the gate.
The only way to go!

We had a beer to cool off after the ride.
And listened and sort of watched the opening bagpipe bands.
This was my view.
The backs of the guards. 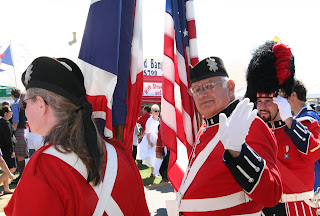 One being quite the flirt.

We were introduced to a new clan.
Clan Batman.

Saw that they continue to start 'em young .

Saw the same cool t-shirts that I so want to buy one for Jim.

And spent the majority of the time watching The Wicked Tinkers!

And why not?
Bagpipes.
Big drums.

One local guy.
And one that ends up on your picnic table.

They play the ever so popular "We Want Whisky" song.
Apparently it works... 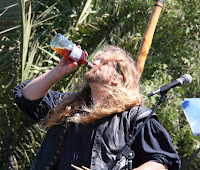 Except for the guy who mis-understood and handed them a flask with tequila in it.
Really, tequila at the Highland Games?
That's a first. 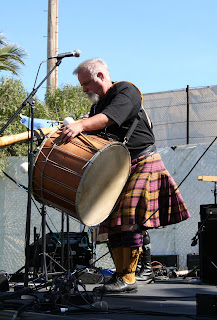 Who got to go up on stage and play with the big boys. 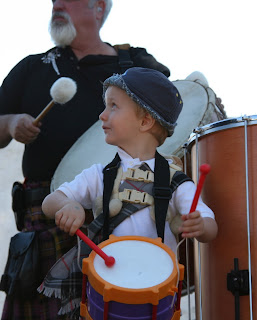 Watched Celtic Spring ~ awesome young musicians and dancers!
Also local.
They were playing indoors ~ no pics as I like to avoid the whole flash in the eyes of performers when possible.

And had some Scotch. 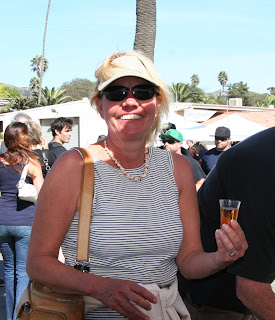 Then rode home.
Posted by Jim and Heather on Meerkat at 3:25 PM

Labels: somehow we never get to where the big dudes are throwing telephone poles

What? You've not heard of those Scots from South of the Border? The MacJimenez! They always carry Tequila. You can spot them by their tartan looks more like a sarape stripe.

You can get a Clan Inebraited 2 different ways. One is to go into their booth at the games and the other is to go to their website and order one. I have one that I got a few years ago but it shrunk when i accidently put it into the dryer and now its to tight. But it's now my motivation to loose weight so I can wear it next year. Yes I am proud to say that I am a member of Clan Inebriated!! By the way we were at the Wicked Tinkers the same time you were, I just figured that out from the tequila thing!! Oh and the little boy with the drums. We were sitting in the grass on the other end of the stage and about half way through noticed the dancing old guy thats there every year. Tell "Uncle Stan" hi!!