We cruised and traveled Mexico with Ian and Anne of "Alana Marie" in 1997-1999.
Back when we were all kids.
Back when Curly asked Anne what Ian did for work in his former "working life".
Back when Anne replied "He was a rocket scientist".
Um, really?
So he was "Curly christened" "Rocket".
And it stuck. 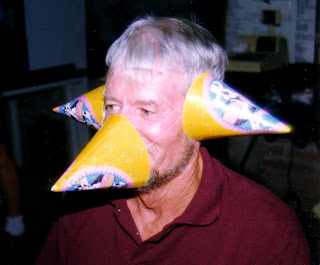 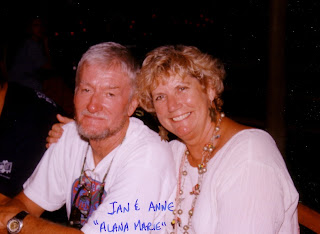 Always with his friends. 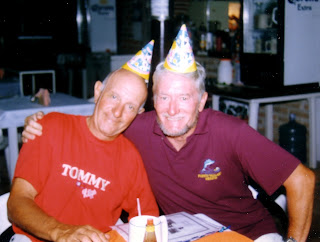 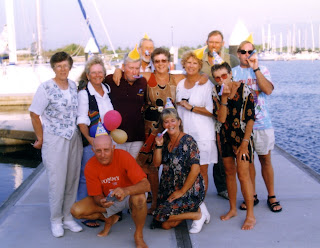 
Yep, the Pooh, PNY's motorhome and The Thistle's little Nissan 4x4 went on a 4 day road trip camping North out of Puerto Vallarta. Quite the adventure with Jim and I being with 4 crazy people. And a psychotic cat... 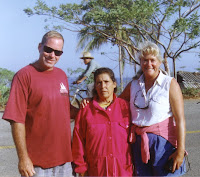 At our first stop we went for a walk in the morning and met this kind of loopy Mexican lady who showed us around a small town. So we invited her for breakfast. She came with us, we fed her, then she wanted to wash our dishes. By about that time, we pretty much wanted her to go home.

At Aguamilpa we had the motorhomes parked along a road - basically along a cliff that looked down to a lake, with only a couple of feet between the RV's and the cliff.

So I (Heather) had to pee and went into someone's motorhome and left the door open, because all the crazies (Anne, Ian, Curly, Carol & Jim) were up forward and we are parked along a cliff, right? As I am sitting on the toilet a small dirty Mexican boy of about 5, with a broken arm in a homemade cast came by the open door and started talking to me. He was looking for aluminum cans. I was sitting on the toilet... so in addition to our empty aluminum cans, we gave him full aluminum cans of soda. And took his picture with me after I finished what I was doing.

Then we headed to Mexcaltitan, a small island out in the middle of a lagoon.

Carol and Curly were fighting (we won't talk about why) so Ian and Anne pretty much separated them. Anne sat with Curly and Ian sat with Curly. 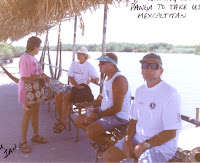 As we meandered about the island we went on a Scotch hunt. Someone told Jim they sold Scotch on this island (probably one of the crazies, because really, Scotch on a little tiny island in the middle of a lagoon?). We were knocking on people's front doors asking for Scotch. Um... no Scotch, but we were offered other things. We ate not dried shrimp in a restaurant with blaring music. Blaring! Then needing a place to camp for the night we headed away from the lagoon as we were being eaten alive. We came to a police roadblock (Semana Santa - Easter Week) and Ian asked where we could camp. The police pointed to the side of the road next to a building and said, "There". So we camped basically at a police alcohol roadblock...

Truckers would also stop there and a lady would cook them dinner. So we shared our dinner with a trucker and the lady and they shared with us. At the end of the night the lady said (in Spanish) she had a gift for me, but was sorry as she only had one and not ones for my friends. She gave me a cross-stitched napkin (beautiful, by the way) and Carol and Anne were not so happy because they didn't get squat.
We gave sodas and candy bars to the police as they kind of watched over us.

Then yes, as we were driving across a two lane bridge, the storage bin on the top of PNY's motorhome came flying off into the road. Stuff everywhere. Us scambling around picking up PNY's junk. Way too funny. We could only do these four days with these people as our sides were hurting from laughing.

Probably one of our most favorite four days ever.

Thanks for including us in your life, Rocket. 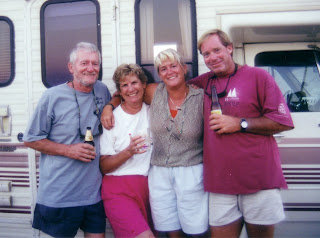 Posted by Jim and Heather on Meerkat at 4:02 PM

That was sweet Heather.