One of our favorite sayings is: "MAKE IT HAPPEN!"
Courtesy of Alan on "Toshal" and the new "Make it Happen" boat "Toshalito".
Long story, but he helped us make our dream come true in getting this catamaran and we kept on him about making his dream come true by getting his F trimaran.
Anyway it's a good one. 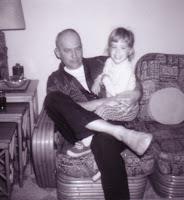 Here is Dad.
And me.
I was little.
He was cool.

My dad had a lifelong dream of going through the Panama Canal.
Not sure how he never got there early on in life as he went a gazillion other places.
Alaska, Thailand, Japan, Hawaii, Scotland, Germany, Holland etc...
But he didn't.
So later in life being the casual guy he was, he arranged to be a passenger on a freighter trip.
Not a cruise ship, but on an actual working freighter.
Some of these freighters will take on 5 to 8 paying passengers who will eat with the crew, not have to dress for dinner, not have to endure bluehairs, not have to go to the midnight buffet, can wear jeans the whole time, blah, blah, blah.
He had done one up the Western US Coast and had loved it.
So he had booked one through the Canal, then what I would consider to be a disaster struck.
Heart attack.
Triple bypass.
The beginning of the end.
He was never fully "Dad" after that.
So they wouldn't let him on the ship.

Several years later he passed away.
The worst part?
9 1/2 weeks after my sister...
It really should have been the other way around.

So anyway, after I had my breakdown of sorts I kind of took control of Dad's ashes.

Scattered some in the Santa Barbara Channel.

Took him (and Mom) on a roadtrip down Baja.

That is him in the peanut butter jar kicking back in the hammock.
He always did like a good hammock!

Scattered him all over the Baja peninsula.

That is him in the middle - the lighter color...
I think he would have liked what we did so far.
I hope...

Some of dad's ashes rode on Ariel's boat from here to Costa Rica, but when Jim got off the boat in CR, so did Dad...
Didn't make it to the Canal once again.

The Panama Canal thing has been sitting in the back of my head for four years.
How can I make this happen?

So when my cousin Carolyn emailed she and her awesome hubby, Bergie were going though the Canal, I knew I could make it happen!
The cool part?
They were going on the National Geographic Sea Lion.
Remember it from when we were up in the mangrove canals in Magdalena Bay almost two years ago?

And then we met the captain in La Paz?
I love my small world!!

So I packaged some of Dad up and mailed him to Illinois.
He road on a plane to Costa Rica.
Whoa ~ deja vu ~ now he's been to CR twice!
And CJ and Bergie took him to the Canal. 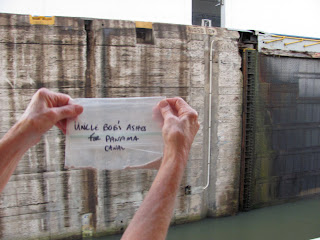 And scattered him in Gatun Lake. 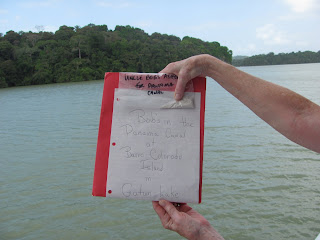 Off of a boat we know.

And waved bye bye to their Uncle Bob. 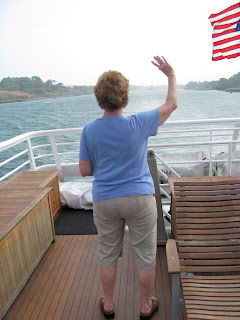 Posted by Jim and Heather on Meerkat at 9:08 AM

Labels: thanks alan for one of the best things to keep in mind, thanks cj and bergie for making it happen

OMG! What a great story. I am so glad your Dad got to go through the Canal and probably stayed there as well.

It's funny, your story hit a very personal note for me. Firstly, Ray and I had the very same kind of furniture that you and your Dad are sitting on in the picture. We know where they got that furniture! It was Air Force base issue in the 60's and 70's. We liked ours so much that they actually let us buy it. We had it for quite awhile.

Secondly, going through the Panama Canal is on my bucket list as well. I love the way your cousin went through. I'd love details on how that trip came about so we can plan to visit your Dad. Love to you both.

Heather, you are a wonderful storyteller...and photographer.

so cool! You are a fabulous writer and I love the pics:-) xoxo delaina (your favorite second cousin)

We liked ours so much that they actually let us buy it. We had it for quite awhile.

Heather, you are wonderful and I love you!