Or, Happy New Year for all you gringos!
All the New Year's Eves in SoCal blend together.
Usually we would have a few people over for dinner and sometimes make it to midnight.
In Mexico we usually get woken up at midnight.
Fireworks and firecrackers.
Loads of them.
Gunfire too.
That one I just don't get.
Remember the bullet is going to fall back to Earth eventually...

In looking back at our New Year's Eves while cruising...
December 31, 1998 was spent at the Southern anchorage of Bahia Santiago.
According to the "stick figure book" we spent New Year's Eve doing the following:
Motored in to Manzanillo for diesel - smooth fueling.
John Francis was our boat bouy!
Back to Santiago - pillow blocks causing us problems.
Bus into "Commercihell" - 8 million people in the grocery store...
Taxi back (this I believe was when the back seat of the taxi was wet and we asked the driver if some kid peed back there, but he said no, it was some people in wet bathingsuits)...
Meridian wine and BLT's were great!
100's of fireworks and firecrackers at midnight! YIKES!

"Libre", "Thistle" and "Pepina Rae" at anchor in Santiago.

December 31, 1999 ~ oooohhhhh the big 2000!
We were anchored at La Ropa in Zihuatanejo Bay.
According to the "stick figure book":
Got the boat ready for the millenium!
Jim washed, I vacuumed.
Made party hats and decorations.
Swam and read.
Baked a cake that didn't really rise...
Made pa-nang (thai dish).
"Sea Fury" over for dinner and Uno (to stay awake).
"Askari", "Unicorn", "Swagman" & "Windsaloft" over to watch the fireworks from all over the bay.

Tangent - "Windsaloft" ended up years later on G Dock in Ventura! So we got to see Peggy again, but unfortunately her husband had passed away... 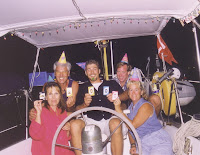 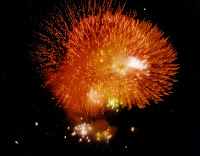 The fireworks surrounded the bay!
Probably the best fireworks show we had ever seen.
Posted by Jim and Heather on Meerkat at 7:31 AM

Such fun.... we get gunfire here too. Is that like a Poncho Villa thing or what? But this year the Dallas police are saying they can track it? I think they may have been watching too much CSI for research. I'm thinking if a person is idiotic enough to shoot into the sky in a group of other idiots shooting into the sky then they are bound to get hit by a bullet on it's way down.... shit happens! What a roaring way to end out a year.... get hit in the head by a falling bullet!