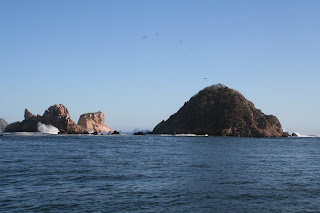 Up late once again, considering the sun doesn't rise in this area until 7:45!
Ariel checked out of the marina and in & out with the Capitana de Puerto, while Jim, Alan & I took the dinghy to Colimilla in an attempt to provision. After beaching the dinghy and walking the couple of blocks to Maria's tienda we were told she was gone! So back to the beach, where Jim & I caught a panga to cross the lagoon back to Barra to start shopping. Alan took the dinghy back to the boat and then caught a panga to meet us in town. The dinghy is just too small to fit three adults, cases of soda, beer, and food for a week! Found a good veggie store where we loaded up with cucumbers, tomatoes, potatoes, lettuce, cabbage, avocados, carrots, limes (can't go anywhere without those!) and bread, milk, tortillas and all the rest of the things we wouldn't be able to live without for the next 5 days. We were smart enough to have taken the dock cart with us, but it was still three loads in the cart! Then back in the panga across the lagoon, where we unloaded it all onto the dock, then up on top of the boat, then inside the boat, then away. Ok, so that was half the day...

So headed out the entrada with intentions of going to Tenacatita - the wind was really coming up and there was really large swells, so crossed the bay to Melaque where the palapas still stand and the broken hotel still crumbles!

With the giant surf on the beach we had no hopes in landing the dinghy... so what to do? Break out the blender and have pina coladas!

So a couple of those, a little Captain Morgan's

A little emailing on the wireless internet and a little swimming...

Then how to show the ones that aren't with us we miss them? Signs of course! 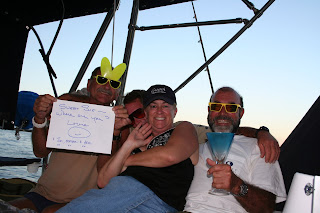 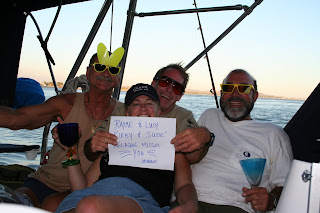 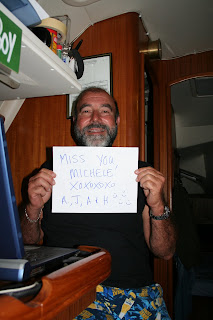 That took up the rest of the afternoon. Ariel bbq'd the arracherra, Alan made carrots and mashed potatoes and I made salad. Dinner and then the MELAQUE ROCKS! We remembered calling Melaque such names as "Melarky" and "Mel-a-que", but the one that really stand out was "Merocky"! We rocked and rolled all night and barely got any sleep - one of the worst nights we have had in awhile! Oh well, now we remember why we used to put out two hooks!
Posted by Jim and Heather on Meerkat at 7:53 PM