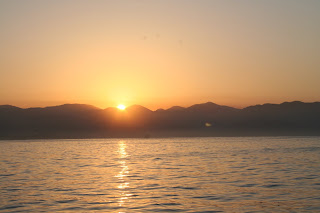 Up to a beautiful sunrise in Tenacatita, but still a couple of days away from being able to get the dinghy to shore, so decided to head South to Bahia Santiago!

It was kind of sad to leave the bay, as I had no idea how many years it will be until I see Tenacatita again. There were still huge rolling swells coming into the bay as we headed out. Had a smooth trip South along the coast. We fished, read and had tuna tostadas. We saw a large ship off the coast that we thought may have been on fire as there was so much smoke coming out of the top of it (uh oh, now we will have to go rescue people), but then it stopped. We decided it must have been cleaning it's stacks. We could see the Manzanillo Airport on the shore and watched a plane land. There was huge surf (what's new?) booming on the rocks of "the frailes" outside of Manzanillo. Jim was driving and I was looking for the fish pens thru the binoculars and saw a few boats. As we got closer I realized I was looking at "Cyclades"! "Cyclades" is owned by our friends, Danny and Deborah, who we met in Zihuatanejo our 2nd year of cruising. They were also berthed in Ventura Harbor for the last few years.

What a great surprise to see them! Ariel pulled "Guavi" up right next to their boat so we could yell over to them. After yelling "Cyclades, Danny, Deborah!" about 10 times Danny came out of the boat and about fell over! It was so much fun to surprise them! They, of course had no idea we were in the area. We anchored and got settled in, then Jim & I dinghied over to get hugs and catch up. We met their friends, Terry & Jonesy on "Niki Wiki", a Gulfstar 50. Terry was knitting some baby socks (she is an amazing knitter) which Alan ended up getting as a gift for his new granddaughter, Avery who was expected within the week. Then Ariel and Alan joined us for drinks etc.

Mexico's inexpensive Rum - reminds us of the old days!

Back to the boat for dinner and a movie! Ariel made the brisket they bought in Puerto Vallarta, baked potatoes and salad. To bed around 11:30 (late for cruising!). Another great day on "Guavi"!
Posted by Jim and Heather on Meerkat at 2:32 PM