Well, lucky me ~ something made me sick and I was up at 2:30 am getting sick.
Ick.
I do not like to throw up...
So we had a lazy start to our trip.
So lazy we didn't even take the two broken air conditioners off of the boat.
At least we were smart enough to put the headsail back on the evening before!

So out of the marina at "sometime" and motored along the coastline.
Jim had two lines out and quickly caught a sierra!
Amazing ~ we caught a fish we could actually eat!

And for once, no skipjacks!

I read and tried to sleep for awhile, as I was exhausted from the night before and not 100% yet.

Jim motored through the San Lorenzo Channel so he could fish (we had heard there were dorado out there!) and I relaxed.

He noticed a turtle floating, so I got up to see it.
We noticed it had a big white thing floating next to it.
We circled the turtle and saw that this was some kind of PLASTIC gunnysack type bag attached to the turtle! 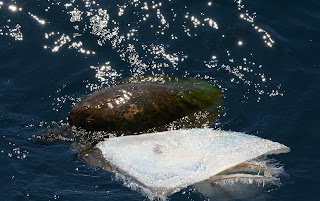 AAAAAAGGGGGGGHHHHHHHH!
We watched the turtle for a few minutes, as we thought he was probably dead.
He finally poked his head up and looked at us!
So Jim maneuvered the boat so we could drift down on the turtle and snagged the plastic crap with the boathook.
The plastic was wrapped around the turtle's flipper and neck.
I handed Jim the filet knife and he grabbed the turtle's flipper.
Jim had to halfway lift the turtle on his side to get to the plastic.
The turtle's head was just a few inches away from Jim's hand and he just looked at the two of us with his big wet eyes.
We were a little concerned that he might bite Jim, but we kept talking to him and hoped he understood we were trying to help him.
Jim was able to cut about 95% of the plastic off of his flipper and the rest drifted off of his neck.
This is what we ended up with. The turtle floated for a few minutes, then put his head back up, took a look at us, then swam down about 10 feet and came back up.
Who knows how long this plastic trash had been holding him on the surface...
He was probably exhausted and starving.
Hopefully he had enough energy to find food, because we sure didn't have any spare jellyfish laying around the boat...
He looks better without the plastic! 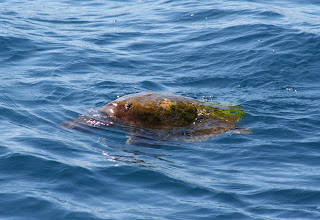 Jim fished around some more.
No other keepers.
Saw some rays jumping though.
In and anchored at Bonanza (the SouthEast end of the island) for a change! 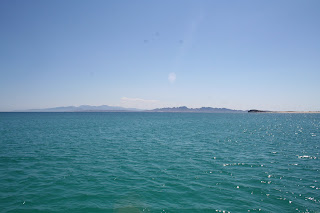 The view back to mainland Baja was beautiful!

We both read, floated in the 84.5 degree water to cool off, I tried to take a nap, read some more.
Jim made us cheese omelettes and english muffins for dinner (I still wasn't feeling good) ~ a perfect dinner!
Listened to the SouthBound Net, enjoyed a little of the beautiful evening, then to bed. Posted by Jim and Heather on Meerkat at 7:24 PM

Way to go, excellent deposit in the First National Bank of Karma.

Awwwww. That turtle story made me cry. Thinking that it had been suffering.
Thank you so much for helping it. You are wonderful people.

Yeah, yeah, yeah. But then we savagely kill 4 dorado and I squished a bug that was inside the boat. Is that a karma bank withdrawal?

Nice rescue! Good on ya!

floated in the 84.5 degree water to cool off
Hmmmmm, sounds like my afternoons...