We left Friday morning and motored out through the fog. We had only one "ship traffic", a N/B tug and tow to deal with, but crossed his bow with a mile to spare.

We saw lots of seals and even a flying fish. We motored up to Willows and found a spot not totally engulfed in kelp to anchor.

Jim went fishing and the females sat and talked, read and napped (Julianne).

Then we piled into the dinghy and headed to the beach. It was the worst dinghy landing we have ever had - took a few waves over the back. We had the new outboard on and it changed everything!! Wet butts and a lot of laughter and we were all ok! 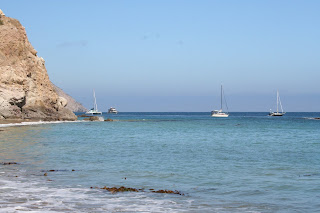 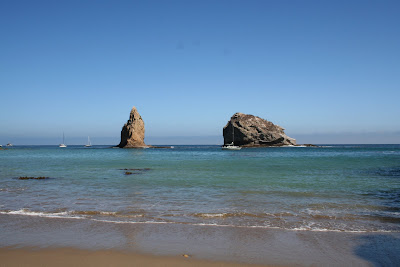 Julianne took off up the hill.
Jim sat on the beach with a Sierra Nevada and CJ & I met up with Julianne as she was coming down the hill. 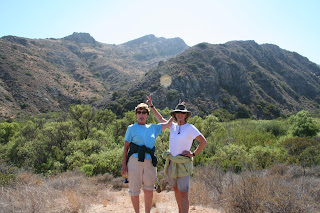 We played on the beach, explored, had a little wine and met a man with his twin boys.

There always seems to be some sort of driftwood sculpture on this beach.
We only found a shell collection, so we made this sculpture.

Back in the dinghy to the boat! 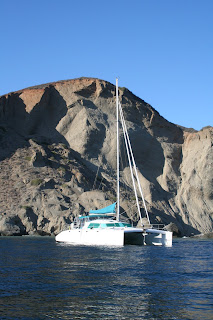 Made a great dinner of shrimp-k-bobs, veggie-k-babs, king crab legs and corn. We watched the stars for awhile then off to bed.


Saturday we all got up late and had our caffeine of our choice - coffee, tea or Diet Pepsi...

Julianne made eggs and soyrizo (chorizo made out of soy) burritos for us. CJ cleaned up and Jim went halibut fishing. We did the reading, talking and relaxing thing again. Juli made herself a nice nest in the net up forward and read. CJ and I talked for hours.

We put the kayaks in the water and CJ & I went first. Jim went snorkling and we kayaked through the kelp and over to the beach. CJ made her first ocean beach kayak landing - perfectly too! Then Juli and I kayaked for awhile. I found a large orange snail on a kelp leaf and brought it back to the boat so show Carolyn. She asked me it's name and I said, "Carol Jo"... 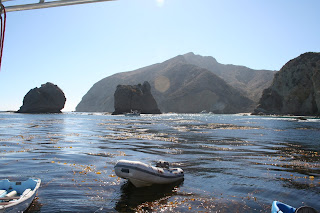 It was absolutely beautiful out!


John & Lourdes from "Reliant" came over for a visit and told us the next day was their 12 year anniversary! 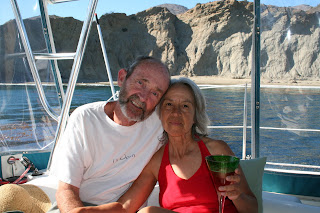 They had dinner guests coming over so only visited for awhile.

The water was warm enough to swim so I swam around under the boat for awhile & poked Juli with the floaty through the net.

Turkey tacos for dinner then the chocolate tasting between three different levels of cocoa. 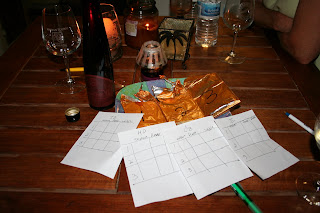 And a little raspberry dessert wine to go with the chocolate!

We put blankets in the nets and all laid up there and watched shooting stars! It was amazing. And so amazing to Jim, he spent the entire night up there!


Up late again on Sunday morning. Did the morning caffeine of your choice thing and relaxed for awhile. Jim had to jump in the water to de-kelp our rudders and props. As soon as he got back on the boat and rinsed off, more kelp came... 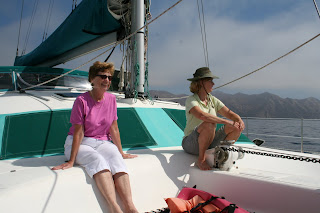 We headed out to the mako fishing grounds on the backside of the island, but didn't catch anything. We did see lots of dolphins and a couple of either swordfish or marlins. 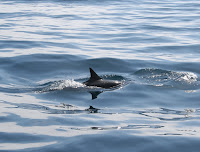 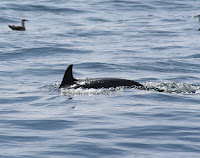 Motorsailed back home (the weatherman told us 10 kts or less, but we ended up having about 20 kts, but too late to pull up the mainsail...) and had lots of neighbors to greet us and grab the docklines. Enjoyed Jim's bbq'd hamburgers and sent the cousins off with an invitation to return ANY time! It was really great to have them for some quality time!
Posted by Jim and Heather on Meerkat at 1:17 PM