Moving at the Speed of Sludge

Yep, that is us.
Moving up the Coast of SoCal.

At the approximate speed of sludge.
First we went to visit Sue and Bill of "Sun Baby".

You know, cocktails and dinner at the Yacht Club.

Then dinner with Mike, Kathy, Ryan and Rudy of "God's Grace".

Which turned in to a "Meerkat" slumber party for Mike and Kathy...
Then the hours long trek from San Diego to Mission Beach, with Mike, Ryan, Rudy and Rudy's girlfriend on board. 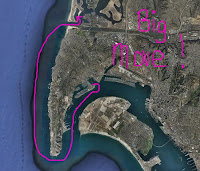 Then enjoyed the boys doing boy things on the boat. 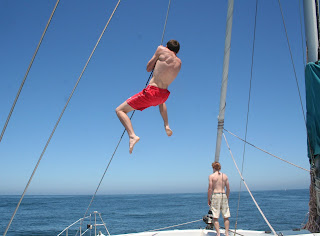 And tried to figure out if they have grown up or just grown taller...
They left us in Mission Bay, where we spent two peaceful nights.
The day we walked on Mission Bay Beach was not so peaceful.
Eeek!
Talk about mass quantities of humans!
Thousands and thousands of bathingsuit clad people under beach umbrellas, on towels, on bikes, on skateboards, pushing baby stollers, on cell phones, on the rollercoaster (that part didn't seem so bad - I like rollercoasters), driving cars, texting, screaming, parking, making noise and just overwhelming the poor people who were used to being by themselves in The Sea of Cortez.
Ok, get us out of here!
So a dinghy ride around the Bay was next.
Uh oh, here we go again...
Jet skis, speed boats, boats towing kids on floaty things, paddle boards, more speed boats, personal watercraft, aaaaaggghhhhhh too much TOO MUCH stimulation.
Ok, back to the boat in the quiet little anchorage.
Posted by Jim and Heather on Meerkat at 5:18 PM

Labels: why is this culture shock not going away yet

Where's your fake shark fin to drag behind the dingy? That'll clear the waterways.