San Blas ~ Being Eaten Alive in the Estuary!

First our overview of the San Blas and Matanchen Bay area.
San Blas is the town on the left with the estuary alongside it.
Matanchen Bay is to the right. 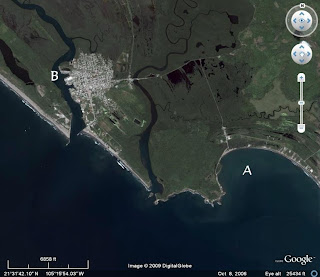 Thank you Google Earth!
We were first anchored in Matanchen Bay ~ "A", then went up into the estuary of San Blas to the very new and small Singlar Marina, where we are now docked ~ "B".
Mainly for internet... HA HA HA!
Actually, so we could walk into town and explore San Blas at night as well as catching the "Jungle Cruise" in San Blas for a longer ride, than if we had caught it in Matanchen.

The estuary entrance was easy ~ although we did have a person with local knowledge on the shore directing, as there were three boats entering at the same time.

With our draft of 3' entering places with bars isn't too much of a concern.
No big deal.

Fueled up and into the marina, which is so new they have no electricty on the docks, no hot water in the shower or jacuzzi and only water on the docks when you don't need it.
Price is right though!

We went into town one night for dinner.
And enjoyed walking the plaza afterwards. 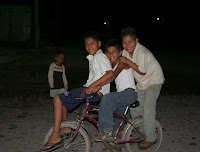 Flashlights helped on the dirt and cobblestone streets.

San Blas has more bicycles than any other town I have seen in Mexico!
Each bicycle has anywhere from one to four people on it...
Even at night on cobblestones.

Yesterday we walked up San Basilio Hill to see the ruins of The Temple to our Lady of the Rosary.
It was built in the 18th century of stone. 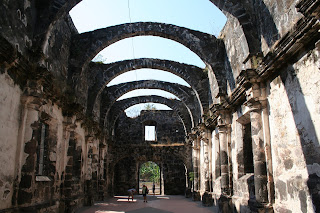 Also on the top of the hill is the fortress originally constructed in 1760.
To us, the view was more interesting than the building, which has had partial restoration and one of the ugliest bust statues we have ever seen... 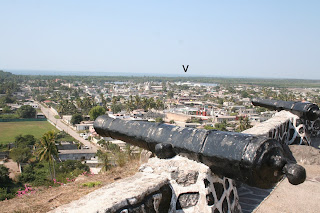 Under that "V" is the marina.
And our boat!


And with telefoto, we could pick out our mast and headsails! 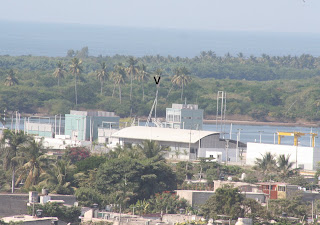 Back down the hill, past the cemetary.

And back through town to our lovely view of the estuary from our slip! 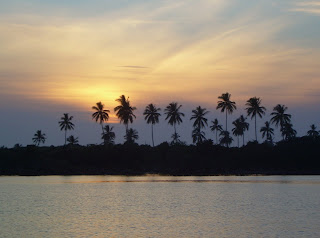 Posted by Jim and Heather on Meerkat at 7:55 AM

Labels: we are having a contest to see who has the most no-see-um bites and it is a three way tie between alan susan and heather

Jim isn't getting any bites?

He says he is... but you can't see them. And he doesn't itch or swell up or anything. The rest of us look like we have the measles.

Taking the time to recognize what you're eating is the first step to losing weight. Several quick diet systems do not succeed since these dieting systems have unachievable or maybe unclear expectations. Our mind will tell us that the top way to lose weight is to just try and get it done as quickly as possible.