Yes, cruising gang from years past, Nacho the dolphin lives!
Jim saw him at the outer anchorage in Tenacatita!
For you that are not members of the cruising gang from years past, Nacho the dolphin is a big boy with a big notch out of his dorsal fin.
He use to torment Ray and Lucy's dog by swimming leisurely past "Pepina Rae" and staring up at the dog.
For. Hours.
Nine, ten and eleven years ago, we would see him with his little dolphin gang in Tenacatita, Melaque and Santiago Bay.

So we are back in Tenacatita! 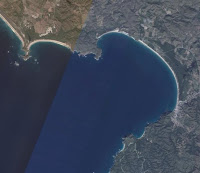 Anchored in the inner bay.
If Google Earth was taking a picture right now, we would be one of the lower left boats at anchor. 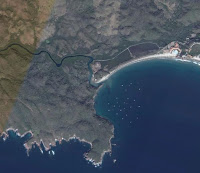 We are back to swimming, making water and doing laundry.
And then kayaking, swimming some more, visiting and watching boats come and and go out.

We had a little generator problem which Jim the amazing fix-it man fixed.
He also fixed the watermaker on "Grey Max".
He is quite popular with "Grey Max" and me now.

One more Google shot of the jungle cruise ~ which we will probably do again. 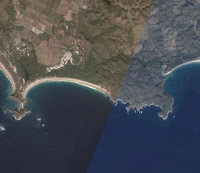 Because we can...
See the little river?

Ok, back to the cockpit to watch for Nacho, his pals and the rays!
Posted by Jim and Heather on Meerkat at 1:34 PM

I remember asking Padre Timo why the ray jumped. He said they were jumping for joy.

OK, I can see the little river >(^$&*()( and yes, I want to be there, OK? And I remember Nacho because he always was rubbing on the anchor chain and spooking me!

Please tell him Hi! for us.

Glad to have you back....missed your postings.

Whatever happened to Padre Timo? Anybody have his email?

And he got that "Jumping for Joy" from me, I am sure because I used to say that about all the fish that just jumped out of the water all the time and it would make me embarrass myself as I would be having a conversation with someone and then would see a fish jump out of the water from the corner of my eye and I would say something stupid like "Oh, look at the happy fish jumping!" And the other person (not having seen the fish) would just look at me like I had just lost it! Oh, well, I loved the happy fish! I was happy too. Mexico was wonderful!

Don't you just love Google Earth? That's wonderful that you get to see a dolphin that you saw so long ago.

I got the most wonderful sopresa in the mail today!!! Check my blog later.

And here I thought the rays were jumping to get little parasites off of them... what do I know?

Jomamma - how are you going to explain that surprise to Jody when he doesn't know you have a blog? ha ha ha!!!!!

haha, you are so sneaky... this is where Maria would have an evil roar.

I can't believe Nacho is still around. What is the lifespan of a dolphin? He and Fritz were such pals. Of course the rest of the anchorage couldn't wait until ole Nacho meandered off so that damn dog would stop barking!

Hello everyone! Who knows where to upload the film Avatar?
I even bought the film Avatar for a SMS to http://rsskino.ru/kinofilm/avatar.html , the link was, but download fails, the system will boot quite strange cocoa something.
Men, advise where to normal as quickly download film avatar?

I sell a boat-program which will help you to outwit auction and to win, initially the boat was created for the Scandinavian auction http://internet-aukcion.ru/ but now the program can work with similar auctions: gagen ru, vezetmne ru and with ten.
The program-boat stakes for you, i.e. for this purpose it is not necessary to sit constantly at the monitor. The boat can set time when it is necessary to stake, thus you as much as possible will lower expenses for rates, and as much as possible increase the chances of a victory.

To all clients free updating and support.

The script is written in php5

optimized to work in a continuous loop
check-activation-filling-spam check ..

Updates and support free of charge.

For the first 10 buyers price 70 wmz (your feedback on the software).

Flooding in the subject no! Write to feedback after the purchase.