Beer Can Chaos in Newport

For some God only knows reason the nightly "beer can" races are held inside, yes inside, the harbor at Newport Beach.
Only in Newport.
Nowhere else that I have seen.
Well, maybe in San Diego, but they let ex-America's Cup boats fly through there on a daily basis, so that doesn't count.

So remember the mass quantities of moorings?
How about the 4 year olds in Sabots?
And the kayakers.
Electric rental boats.
Stand up paddle boards.
Swimmers.
Yes, swimmers.
Let's not forget the ferries.
Ferries with cars on top.
Three ferries crossing in front of racing boats.
Racing boats with limited visibility and skippers and crew screaming "starboard!" 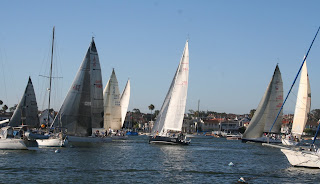 Patches and dents on the moored boats on the inside line...
Posted by Jim and Heather on Meerkat at 12:23 AM