When Exactly Does a "Rock" Become an "Island"?

Another question to keep me up at night...
I have always been told we have four Southern California Islands off our Coast with another four further South.
We have San Miguel, Santa Rosa, Santa Cruz and Anacapa.
Remember these four belong to us....
Further South "they" have Santa Barbara, Santa Catalina, San Clemente and San Nicholas.
So far I have been to six of the eight that I knew about.
But wait...
What are these other islands?
Are there more?
Are there more that I have been to?
At San Miguel, there is an outlying island, "Prince Island"!

What is this "Prince Island" thing?
Why is it not included in the list of Southern California Channel Islands?
And what about it's little buddy, "Castle Rock"?
Wouldn't you think the Prince would have his Castle be on an island?
What is "Castle Rock" missing to make it only be a rock, when it's slightly larger neighbor gets to be an island?

Hey, Santa Cruz has a little buddy too.
"Gull Island"!

And Santa Barbara Island has a second island as well! 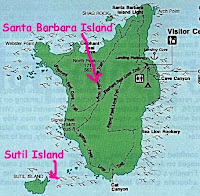 Labels: and why does all of our history tell us we have 8 islands when it should be 11 islands

My definition would be that if you (or some really crazy person with awesome outdoor skillz) can live on it self-sustained, then it's an island.