Catalina Island in a Nutshell

Too many people.
Too many powerboats zipping by making giant wakes.
Too many jetskis.
Eight billion rent a kayaks.
Some that go under our boat...
Eek!
Avalon was CRAZY!
But we still had fun...
First we had to get there.
And dodge whales on the way.

Then we had to find a place to anchor, as there is no way, no how to get a mooring in Avalon in the summer for a 49' cat.
Not that we wanted to be in Avalon anyway.
But we did want to go there, for our one night out!
So we anchored North right off of Frog Rock. 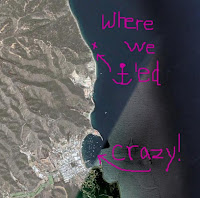 Just at the shore boat limit, figuring we would be out of the craziness.
Not quite.
There is a rent-a-jetski barge between Frog Rock and Avalon.

And a boat on the beach. 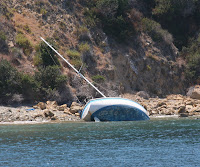 Should have bought a Delta!
We watched who we hoped was the owner strip the boat each morning for a few hours.
And allowed his dog to sit on the beach and bark.
The. Entire. Time.
And watched the Harbor Patrol and Lifeguard patrol cruise by and not seem to care.
So we didn't either.
Except about the dog.
I considered tossing strychnine laced hamburger balls on to the beach.
No, not for the dog, for the owner!

Uh what else?
Watched the "Tole Mour" sail by. 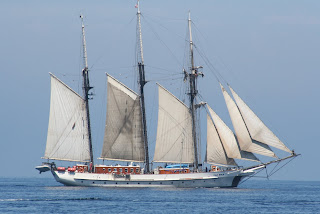 Later with full sail up, but partially hidden by the 257 thousand power boats moored in Avalon... 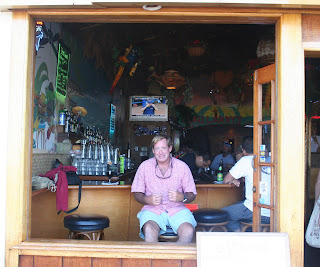 Where we were lucky enough to get our favorite bar stools in the window seats!
The best place in Avalon to people watch...
We watched these teenage boys get lots of hugs. 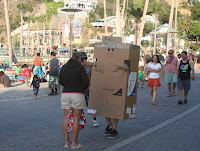 
Including a hug from Ramrod, the mascot from "Sweet Lorraine". 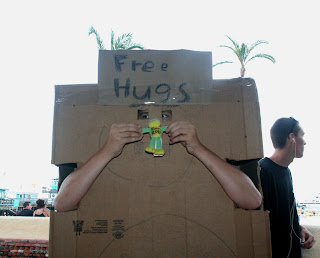 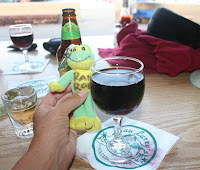 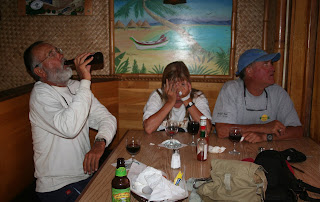 Next stop, The Marlin Club!

I had forgotten how cool this bar was! 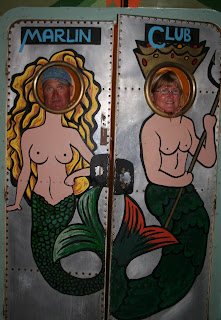 Ok, it was time to get out of the nuthouse and head up island. 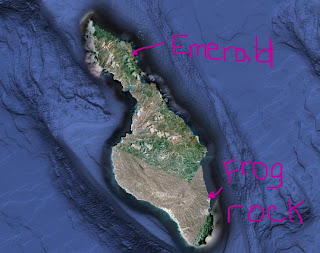 We slowly cruised up the front side, poking our bow into each anchorage and mooring area.
There are lots of cool campgrounds...
Straight out of those 1980 teenage horror films, complete with the individual cabins, floating docks, small sailboats and camping teenagers.

With all the moorings it is hard to find a place to anchor, but we got lucky at Emerald Cove. 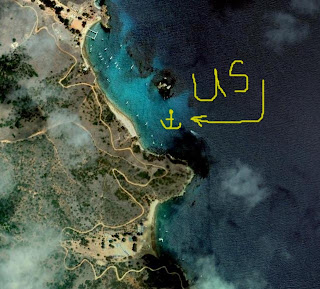 Beautiful.
Clear water.
Shallow enough water to not have to put 200' of chain out.
Friendly harbor patrol guy who told us exactly where to anchor (saves $37 / night!).
And a boyscout camp with a bazillion little boyscouts...
In kayaks.
In canoes.
Swimming.
Hiking.
Singing.
Sailing.
So fun to watch!

And Jim and Lucy of "Passage II" met up with us!

So hora feliz on their boat, which gave us a nice view of our boat.

I kayaked.
Hiked part way up the hill.
Beachcombed.
We swam.
We cleaned kelp off of the saildrives, rudders and anchor chain.
We read.
Dinner on "Passage II".
Re-met Denis and Holly from "Tango" and had happy hour on "Meerkat" with "Passage II" and "Tango".
Did boat projects.
Jim changed the zincs.
Dinghied over to The Isthmus to take trash in, check out the book exchange and explore the general store.

And saw a dog with the longest tongue in the history of dogs.

Said adios to "Tango".
Said adios to "Passage II" and headed back to Newport Beach...
Posted by Jim and Heather on Meerkat at 2:56 PM

Labels: that was a big nutshell

Yep, sounds just like cruising in Mexico! Well, without all of the irritations... We can't wait to meet up with you guys later in the Summer.

Looks like a great place and it'd be even better without all the jetskis zipping around. I'm guessing it's a little pricey though?

Looks like fun. What happens when one of those jetski-ers whacks his head or something harder on the underside of your boat? Who pays for the damage? Or do you get to make a flag for your mast from his back hide?

Ahhh...Luau Larry's. My favorite place. Crawling distance to the Pavilion Lodge next door.

A large, uncontrolled powerboat moving ~5 kts swiped through the Avalon mooring field when we were there last November. It came 5 feet from prematurely ending our cruise before HP (amazing people) got it under control. Ugh. We watchd this thing T-bone and totally crunch one boat, and badly damage a half dozen others. I do have some good memories of Catalina, but don't ever want to go back to Avalon!

Sounds like Seattle/Puget Sound during SeaFear ... I mean, SeaFair. I got driven off a local beach during the heatwave by all the diesel exhaust spewing out of the Navy ships, Canadian Navy ships, Coast Guard, tour boats, Victoria Clipper, harbor fire prevention boats, tugboats, ferries, private boats, etc., etc.

And just think Drunkneers day is only 2 months away!!

Which is why, when someone nearby says they saw a gorgeous older male golden wandering around, I still go looking for Zack.. [url=http://officialcanadagoosesoutlet.ca]canada goose outlet[/url] Elucidations, is known as structure-based drug design. (Incidentally, being a logical type, I worked out if she was right, IÃƒÂ¢Â‚Â¬Â„Â¢d rather be in Hell with Mum and Dad, but if she was wrong, who cares, so either way, I may as well reject her religion with impunity).. Skinheads were no different.
They then used the drivers to send fliers around town proclaiming that the office had moved, and send all your cheques to the new address. [url=http://www.icanadagooseca.com]canada goose parka[/url] In most people, these flakes of skin are too small to be visible. [url=http://officialcanadagoosesoutlet.ca]canada goose[/url]
[url=http://flyballbags.com]canada goose[/url] The library gains many advantages with the new program, among them, having fines and overdue materials automatically taken care of, a more modern look, more detail, links to things such as author and series, as well as being able to be accessed by anyone with an HIS user and password and on the HIS network. [url=http://www.onlinebeatsbydreoutlet.com]beats by dre studio future shop[/url]

White belly distinguishes from Dunlin and Knot. [url=http://www.vanessasac.com]boutiques vanessa bruno [/url] My wife is finishing her master's in a city that was almost untouched by the recession and where property prices have held up well. (The American visitors asked ABC News to withhold their last names because they were in Cuba illegally and risked being fined on their return to the United States.). It can be hard to find your style at just one or two stores.
You can place your spikes on roof and windowsill.. [url=http://www.icanadagooseca.com]canada goose chilliwack bomber[/url] Shopping online makes plenty of sense if you know where to buy from. [url=http://officialcanadagoosesoutlet.ca]canada goose sale[/url]
[url=http://flyballbags.com]canada goose outlet toronto[/url] Christian Louboutin footwear features worn out your procedure of the fashion world, it will be with good rearfoot and even reddish solesYou isn't going to get in the direction of walk out Louboutin Great britain your own detect, along with sterling christian louboutin slingback your own small, great and as a consequence really enjoy human body could simply convey souls's factor the current 2 need to have in your going on a go out of your private spot. [url=http://www.onlinebeatsbydreoutlet.com]beats by dre pro kopen[/url]