If it's Tuesday, it must be Tenacatita (or "Surf's Up in Tenacatita!") 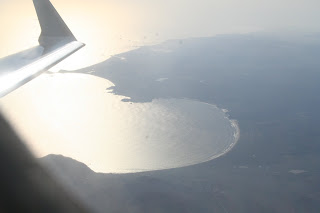 The two bays of Tenacatita!

Up after a rolly, rolly night we said, "Let's get out of here!"
The wind was already up and blowing early. It calmed down when we got out near the point however. Caught a couple of skipjacks (Jim is still the skipjack king!) as we rounded the point.

The surf was really up as we came into the bay. The waves were crashing on the beach sending huge amounts of spray 30 feet up into the air, so landing the dinghy on the beach was out of the question.

I made my favorite Mexican sandwich of avocado, cream cheese, mayo & cucumbers on fresh bolillos for everyone, while the guys watched a fellow cruiser flip his dinghy in the giant surf (glad I missed this). Then we all watched as the locals helped him retrieve his outboard, fuel tank and the rest of what was in his dinghy. There was no way this guy was going to be able to row his dinghy back out thru this surf, so they ended up having someone swim in a 300' line and have another large dinghy tow it off the beach. The guys that were stuck on the beach now had to wade thru the river and hike around to the "dog beach" or "Jungle Joe Beach" as we call it. They then had to time the waves and swim out to the other dinghy. This took about four hours...

I was pretty sad to miss doing one of my all-time favorite things to do in Mexico - take the dinghy up the "Tenacatita Jungle Cruise", but didn't think it was worth breaking my neck or dying over. Alan even offered to take the dinghy in to Jungle Joe Beach, then carry the outboard over to the river for me! Thanks Alan, but I didn't want you to break your neck either. So what to do? Showers, a little dessert wine and play some music!

Another boat was enjoying our music, or so we assume, because Manuel, a drunk Mexican man floated over from their boat to join us. He was pretty lit so we had to wave over his boat boy to come get him in the dinghy. Ariel had fun talking to him, but it was a little scary to me. No one should be in the water after that many coco-locos! 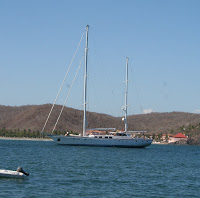 Then we watched a giant sailboat come in the bay - it had lots of boat boys! All in uniform too! But even the big 110' sailboat was rolling in this swell!

Ariel made pasta for dinner. Then we all read and went to bed early. It was rolly off and on, but a heck of a lot better than Melaque!
Posted by Jim and Heather on Meerkat at 11:57 AM