Caught the 6 peso bus back to Bahia Santiago and then grabbed a couple of cabs for the mile or so back to the beach. The beach was packed with a few thousand Mexican people playing in the sand, eating, swimming, burying each other and playing with the blow-up plastic beach toys! 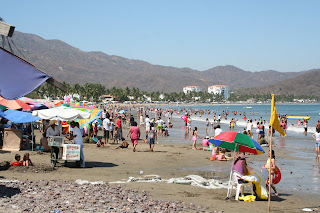 We found a table for the eight of us (Danny, Deborah, Jonesy, Terry, Ariel, Alan, Jim & me). Ariel had a coco-loco (crazy to me as there was tequila instead of rum in it), and the rest of us had a couple of beers.

Terry was just finishing up knitting a pair of baby socks. She gave them to Alan as a gift for his new granddaughter, Avery. 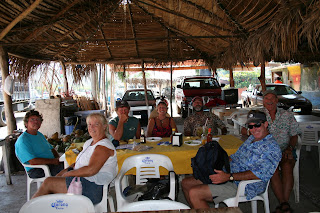 Here we all are (except me, as I was taking the picture)!

Danny and Deborah decided to take their coconuts "to go" and make their drinks on the boat. The waiters selected then stripped the coconuts for them.

Ariel and Alan headed into the town of Santiago to get Alan a haircut, have dinner and explore. So Danny, Deborah, Jim & I went to "Cyclades" for some Arrogant Bastard Ale for the guys, vino for me and a pomegranate tequila margarita for Deborah!
Posted by Jim and Heather on Meerkat at 10:55 AM