Drive around the Lake with a stop at the Pukka Waiku Discoteque (hmmmmm...)

We had seen this place on our way up to the Volcano and thought, "What the heck is this place?" (well, it was more like, what the hell, but you get the idea)... 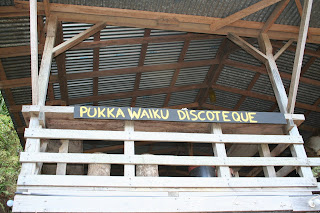 So we had to stop! It was before 11:00 am (the time they start serving beer), but the guy made an exception and sold us three beers. This place was cool! The front area is something out of an old western movie, complete with saddles and oxen yokes!

We couldn't make the disco / western movie connection and must have looked stumped. So the owner told us to "go check out the disco" and walk up the stairs and up the path. Whoa - this place is a trip! 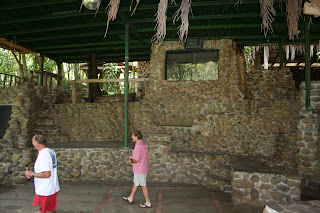 There must have been a million rocks used. There were dance floors, bars, seats, overlooks and little rooms all over. Even a disco ball! We were told that on Saturday afternoons / evenings it is a disco - they have entertainment and all the locals come for the party (another reason to come back). 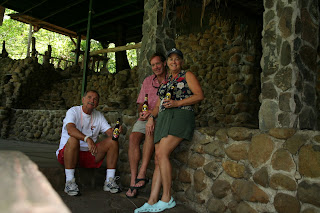 We weren't hungry, but the food smelled great, so we ordered a plate to go to split later. There was a stone oven with a fire going down below and the owner cooked the food up above. He insisted I take a picture of him putting our meat on the grill!

Having an Imperial beer while waiting for our food to cook. 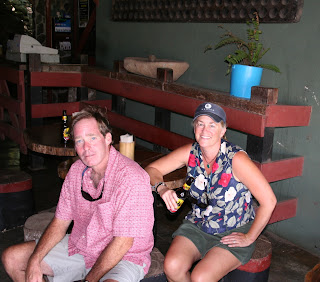 Said our goodbyes and headed the rest of the way around the lake. The area is known for a lot of wind. There must have been 50 or 60 of these giant wind generators on the West end of the lake.

Posted by Jim and Heather on Meerkat at 5:14 PM