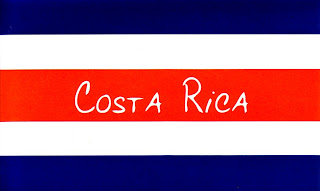 I left Ventura at 7:30 pm Friday night & did the "Pacific Coast Highway to LAX" drive that I'm getting used to! The Delta Terminal was absolute chaos - I was SO glad I got there hours before my flight...
Had a couple glasses of wine while I read thru the travel guides (hoping it would help me sleep)... I did get some sleep on the plane.
Arrived at the Liberia International Airport (which actually has some long name to it) right on time - 7 am!
Jim, Alan & Ariel were all outside the open air terminal so I could see them as I was in line for customs and immigration. Hot and sticky here!!
They had a small Toyota with some weird model name like "Yaris" or something. The guys were hungry, so we stopped at a German Bakery for coffee and breakfast - I had a wonderful fruit plate that I could not even finish.

We drove through a beautiful area of farms, trees, hills, jungles to Playa del Coco where the boat was anchored. Jim had made reservations at the Hotel Coco Palms.

We had a room right across from the restaurant and pool area.

We were lucky they let us check in at 9 am! A few minutes after we carted my stuff inside there was a knock on the door and Ariel handed us an open bottle of white wine and two glasses!!

Well, what the hell, we are on vacation. I do believe this is the only time I have had a bottle of wine at that time of the morning...


We enjoyed the wine and I re-cooped from the red-eye. Then we took a walk around the small town and looked into some of the gift shops. It was pretty muggy out, so went down to the beach to Papagayo for a couple of drinks. I did take some pictures of this, but the disc croaked again, so I lost those pictures. We walked across the small footbridge over the stream and saw a tail-less iguana.

Back to the hotel to cool off in the pool.


Ariel came in and met us for a drink - Jose, the bartender makes a wonderful mojito! 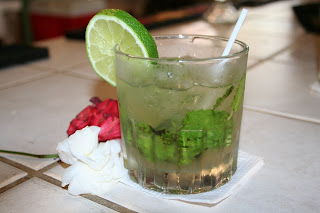 Jim was a happy guy! 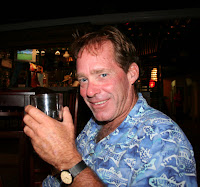 Ariel wanted to give us the night to ourselves, so took off. We cleaned up for dinner and decided to have dinner at our hotel - good choice! I had tuna in an orange chipotle sauce that was sweet and spicy! Jim had a steak with mushroom sauce. 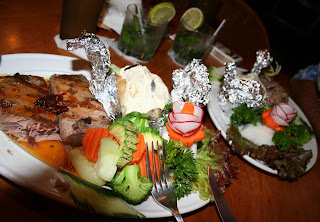 The presentation was great! Our baked potatoes were in foil swans and the vegetables were cut perfectly! Our meals were both excellent - but too much food!

We heard a weird "thunk" and saw something fall from one of the ceiling fans nearby. Hmmmmm... what was that? The owner's girlfriend checked it out and ran to get the busboy. A bat had flown into the fan and fell to the floor! 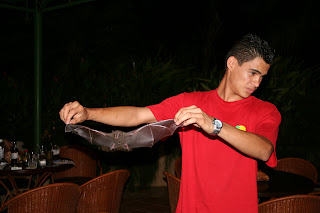 I guess his sonor wasn't quite working that night...


Then to the small market attached to the hotel for waters and some cookies.

They had a great selection of canned goods and vegetables.

We weren't quite sure what these mystery vegetables were...

The tomatoes and potatoes were huge! 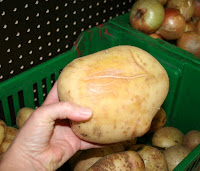 And the selection of tuna was amazing! 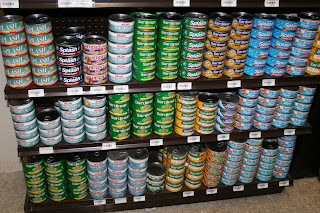 To sleep in the air conditioned room finally!
Posted by Jim and Heather on Meerkat at 4:40 PM