Jim is finishing up his projects in Ventura.
We cleaned out the crap we left in my sister's garage.
We cleaned out major crap stored at our ranch.
Watched my cousins, John, Patrick and Meadow dumpster dive through the crap we put in the trash bin ~ well, Meadow had to take stuff out so she could put her trash in cause we overflowed it... And besides we put some pretty cool crap in there ~ old fenders, line ~ had to tell them it was rope so they, as non-boaters knew what we were talking about, tarps, an old hookah hose, books, old boat parts and more.
Gave John an espresso machine ~ got a big smile on that one.
Gave Meadow a beggar bowl my Dad got in Thailand ~ on the condition it stays in the family.
Gave Patrick a bunch of crap ~ can't remember what but he was happy.
Took crap out of Jim's truck to put in storage.
So now we have room in Jim's truck to put all the crap we bought and want to take down to Mexico.
Been shopping a lot too ~ shop, shop, shop ~ more crap.
Solid albacore in water, shorts, Beaver Hot and Spicy Mustard, New Mexico Chili Powder, computer parts, t-shirts, vino, beer, scotch, smoked oysters, WE NEED A BIGGER TRUCK.
Loads of crap.
Loads. And. Loads.
We will look like The Beverly Hillbillies.

And we check weather.
We used to check weather once or twice a day.
Now, we check it about five times a day.
Sometimes six.
Or more.

Boris turned into a Hurricane, but he is back down to a Tropical Storm now.
He still has a nice swirl going on, so an including an updated satellite pic of him : 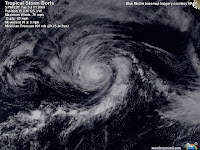 And here is the next system in the lineup , who is still an "Invest" but will be a female D name if she increases: 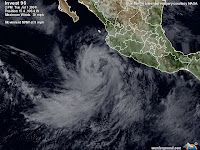 I think it's time to head back to the boat...

I found this cool shot of the Ventura Harbor entrance on what looks like a crappy day... We have had some interesting surfs in to this harbor over the years... 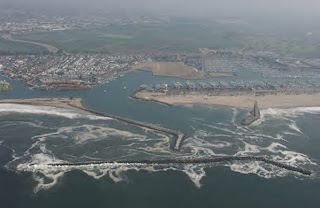 Ok, time to go clean up so we can go to dinner on "Passage II" - yum.
Posted by Jim and Heather on Meerkat at 4:12 PM

Labels: Crap is my favorite word

That shot of the harbor entrance looks almost like the time it was so shoaled nobody could get in or out. I saw someone walk across from one jetty to the other!

I wish you had room for me to come too!!

OK DORK. Here goes. Glad we all got together for lunch. Like in the good ol days out at Catalina !!!! HA. Have a safe trip back. Vickie

Love the name 'Meadow'.
I want to change my name now.
Meadow Perkins.

Hallso, that 'invest' has been called Douglas. Ick. Horrid name. I'd have gone for Doreen or Deidre.
Or how about Dumpster. That's more like it. Keeping in with the theme and whatnot.
p.s I loved your photo history of your mother. It was very moving.