Back in the USA!

Well I have to tell you, it was pretty emotional to check in the last time from Mexico on the Amigo Net and to cross that invisible line in the sea. 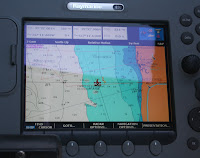 And a lot of "What are we doing? We are going to freeze? We can't afford to live in the US? AAAGGHHHH! Turn the boat around!" kind of thoughts.
And then the "Uh, we have no money, need to go back to work" kind of thoughts took over and won...

So here we are at the cheap slips in San Diego.
But how fun was it to have Wayne of "Capricorn Cat" standing on the dock to grab our lines and to have a dock party already in the planning stages!

But first, the US Customs check in.
"Vela" got searched pretty good and had to throw pretty much all of his vegetables and fruit away, including his potatoes and they made him throw away his frozen chicken!

"Capricorn Cat" got searched in detail, including under Eric's bunk and had to throw away most of their vegetables and fruit and the customs guy wouldn't let Carol eat the last grapefruit.

"Meerkat", possibly because we had a couple of geezers on board, barely got searched, they let Tim and Stan eat the last grapefruit and only took our lone remaining unripe avocado.
They were even going to let us keep our limes, but Jim tossed them.
And we got to keep our potatoes.
And we got to keep our frozen chicken.
And they never asked how many 12 packs of Tecate we had left...


A lovely dock party was thrown together, with help from Tom and Helen of "Catatude" (their boat is in La Paz).
Richard and Dona of "Latitude 38 Magazine" joined us, along with "Worldwind" who had come up a few days prior to our clan.
We were missing "Bristol Blue" and "Allegria", as they were still in Ensenada...
But loads of fun was had, loads of snacks and drinks were consumed and loads of stories told.

I amazingly enough had saved the wonderful bottle of chardonnay that Pam sent down with the guys for this celebration. 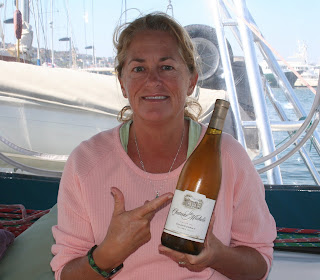 We also took loads of pictures...

The "clan" ~ Tim, Stan, Me, Jim of "Meerkat", with Eric the Great reclining in his kilt, Wayne & Carol of "Capricorn Cat" and standing Aaron, Heidi and Chris of "Vela". 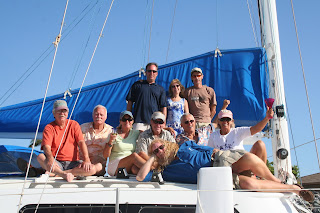 And I miss my GF Carol already... 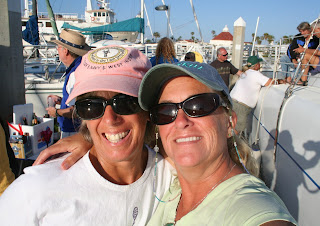 And the next day?
A sad goodbye to the world's most awesome, wonderful, incredible crew!
Laundry.
Von's for complete culture and sticker price shock with Chris.

Visit from my cousin Julianne.
Visit from Jim and Lucy of "Passage II".
Sleep.
Posted by Jim and Heather on Meerkat at 9:00 AM

Well, you made it. Of course I had no doubt and it sounds like it was a fun passage.

Major bummer about customs singling out folks who don't look "normal" to them.

How long do you have to "work" before you are shipping out again?

Well, first we have to find jobs...
Or a corporate sponser.

P.S. Alaskan Dave they probably would have searched everything on your boat!!! Undies and all! Ha ha - actually we had a gal and a guy that were really nice and cool and the other boats got two hard core guys. But I just put my "port captain attitude" on and am super nice, make eye contact, smile and am really patient. Works every time.

If you decide you are freezing and need some heat, just drive up to Bakersfield and you'll be hot all right. It's awful up here right now, I'd love to be by the ocean freezing.
Welcome back to the good old USA, just in time for the big recession!

I am freezing. Just don't know how to drive the boat to B-field... It's cold and windy here and it even rained on us twice today! Weird SD weather...

But you could come here to cool off? Except you have 458 cats to take care of...

How soon until you leave again?? LOL :)

Sounds like "C" dock is starting all over again. Keep it going guys and get ready for the next season.