Isla Coyote ~ El Pardito ~ The Last of The Sea Favs! 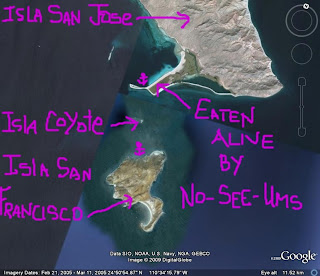 I think this was a favorite.
I'm not quite sure.
It only took five minutes to explore.
It's basically a rock.
A rock with about twelve people living on it.

Maybe eight or nine houses.
I didn't count.
A chapel.
An old school.
And whale bones.

The weirdest thing?
A gringo couple from Santa Barbara, California live there.


But I have always wanted to go there and we finally did.

But first!
We spent one night at Amortajada at Isla San Jose.
Big mistake.
Great beachcombing, but also I was great food for the no-see-ums.
There were actually little spots of blood all over our sheets.
I had over 30 bites from the neck up.
Never again...

So headed over to the North anchorage at Isla San Francisco, then dinghied the short trip to the tiny island of Coyote ~ El Pardito.
The charts and books all call it Isla Coyote, but the twelve people who live there call it El Pardito. 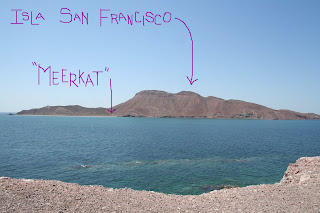 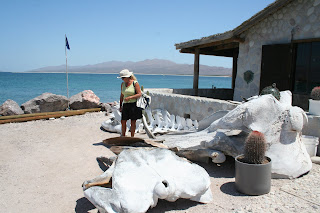 Great views of the nearby islands and mainland Baja. 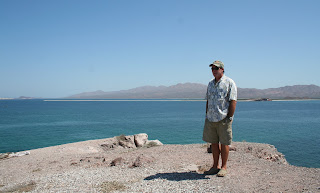 Nice people.
Nice ladies we saw beachcombing the day before who make necklaces out of shells.
So a little gift-shopping, a little chatting and the five minute exploration was over.
Back to the boat!
Posted by Jim and Heather on Meerkat at 2:45 PM

Labels: finally caught up on this blog thing

Ooooooo, I could handle living on El Pardito. Although it could be a little crowded...

Nice maps, btw. Much better drawing than any 5 year old could do :)

No pool there.
Oh, but you would have the Sea!

And the drawing getting better?
Again, learned from the best and ya know, I was a graphic artist after college (but that was a very long time ago...)