Puerto Escondido ~ Not So Bad After All... 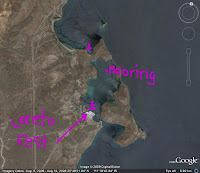 Escondido had never been one of my favorites before.
I could never quite figure it out.
A hundred old boats anchored there for years on end.
Some never to move.
Some falling apart.

I just didn't get it.
It's now cleaned up and full of moorings.
This time I "got it"!

The moorings are there because it is deep water.
The boats move.
People go in and out.
Most of the boats are in good shape.
The islands and nearby cruising grounds are the best!
The mountains in the background are spectacular.
Loreto Fest was enjoyable and not political (as it was back in the old days...)

We enjoyed some excellent California wine courtesy of Jeff of "Journey" (from Ventura). 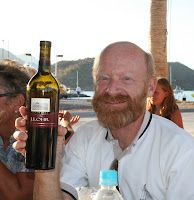 We played with Rick & Karen of "Eyes of The World" (from Ventura) and got to know Greg (not in the photo) & Deb of "Lion's Paw".

We watched Jaime of "Don Quixote" fall in love with a kitten. 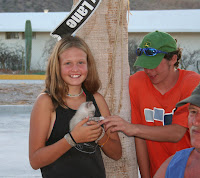 And I learned how not to leave a boat in hurricane season...

And we learned where 8:30 Cove is and had it all to ourselves! 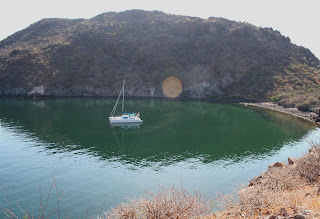 It was all good except the port fees.
We paid $231 pesos to anchor for one night...
About $17.50 US.
Mmmmm... we paid less than that a night for a dock in San Blas!
So that part I didn't get.
And apparently neither do they.
Because I won't pay that again.
Posted by Jim and Heather on Meerkat at 1:43 PM

Labels: a new and improved escondido

Lots of changes in the years since we camped (absolutely free) on the beach near the entrance to the bay, some not for the better, though getting rid of old boats was a good thing. Big sigh....it was all so relaxed and friendly in those "old days", and not a fee to be asked anywhere!!
Last time I saw it, they'd tried to put in some docks and started the campground back up the drainage from the mountains, but it didn't look too smashing at that time.
They must have found someone with the knowledge to make it work (though that does seem like rather a lot just for anchoring!)
Beautiful site, though.....

Margo is my Mommy. She has spent a ton of time in Baja too. With my Daddy. And me. And once with Jimmy and me. Way fun. She was so cool - peed in the desert a few times and even changed into her bathingsuit on the beach (when she was 83 years old!). My Mom rocks!