Again, Make the Ships Go Outside The Santa Barbara Channel!

In reading the local Ventura (where we used to live) newspaper online this morning, I read an article about volunteers trying to document and protect the whales in The Santa Barbara Channel.

Last summer after three whales turned up dead either floating or on the beach, I did a post where I suggested the ships go outside the channel while the whales are in the channel. 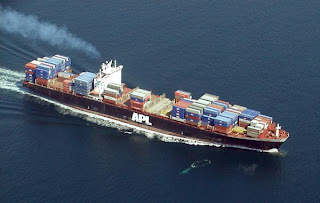 Here is a another photo I swiped from the article.
In this one Mr. and Mrs. Whale are lucky.
They aren't being forced to play chicken with a container ship that outweighs them by 103,461 tons. 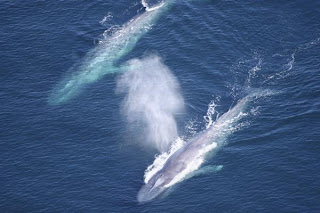 Photo outright stolen from Anthony Lombardi (thank you Anthony - I am just trying to make a point here.)

Ships - pick on someone your own size or GO OUTSIDE THE CHANNEL!
Posted by Jim and Heather on Meerkat at 6:31 AM

Labels: ships you need to do the right thing