Watching the Olympics on Mexican TV

There is something very strange, interesting, and somewhat entertaining about watching big events on TV while you are in a foreign country.
I watched America's Bicentennial Celebration on French TV.
And I have watched The Olympics several times while being in countries other than the USA.
But there is nothing like watching The Olympics on Mexican television...
N O T H I N G.

The commentator stage set looks like something from a bad 70's game show. 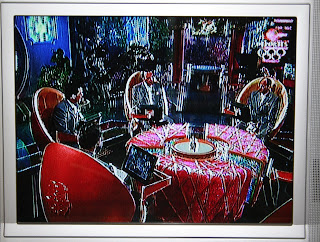 The colors, the flashing lights, the metallic stripes across the center table, the egg chairs - WAIT, EGG CHAIRS??
When is the last time you saw a chair that looked like an egg? 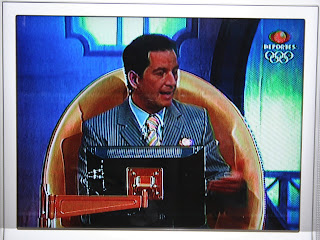 I think they have some of these on rides in Disneyland...
Why do they even have a table in the middle when each guy has a tv screen right in front of his face?
And why put them in a circle?
There is something not right about this set...

The choices of sports are pretty funny too.
Interrupting men's gymnastics to show women's judo.
But, hey one of the women doing judo was from Mexico!

Mexico is very proud of their athletes ~ which is a good thing!
Mexico's one medal awarded so far was won by Paola Espinosa ~ a diver from La Paz, and her partner (sorry, can't remember her name) for sychronized diving (another topic to follow).

Then there are the skits they use for filler (because it certainly can't be called humor) in between broadcasting sports.
This one is much newer ~ I believe this is from the 80's instead of the 70's! 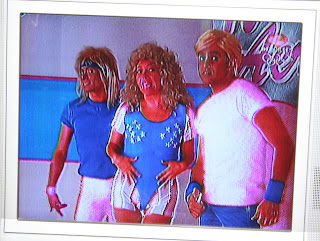 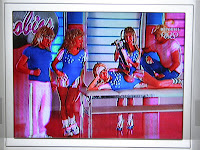 It was called "Nancy Aerobics".

What is with the blonde wigs?
Who are they making fun of?
Are they trying to make fun of us (the USA) in the 80's?
That is not necessary.
We make fun of ourselves in the 80's.
All the time.
Who thinks this is entertaining?
It's kind of scary.
But in the long run reminds me of US programs...
The ones that embarrass me.
You know, all the "reality TV".
What is real about a bunch of chicks living in a mansion fighting for "an elegible bachelor"?
Yep, that's real ~ happened all the time in my old neighborhood.
Posted by Jim and Heather on Meerkat at 7:58 AM

Labels: ok i will get off my soapbox now

Have you been drinking my wine? You are starting to sound just like me... cracking me up!
We are supposed to watch Mexican TV for my Spanish classes... it's painful. Their comedy shows stink. But the Novelas!!! Muy buen!

No, I have not been drinking your wine. But I would be very, very, very happy to drink your wine. Please bring it to La Paz, Baja California Sur, Mexico. I will even share it with you.
OMG - they want you to watch Mexican TV for your Spanish Class? Are you sure that isn't Torture Class? Like for terrorists or spies? Eek.
I think I will have a glass of jomamma's wine now. :)