Five Boys and Me ~ aka "Bloody Decks"

Five boys and I went fishing today!
Almost all of my favorite boys in La Paz ~ we were missing our nephew Johnny (but since he isn't even six years old yet, he probably would have been totally bored).
Jim (hubby), John (bro-in-law), Ricardo (best friend in Mexico and our business partner), Ricky (son of Ricardo) and Chumbo (other son of Ricardo, who's real name is Juan Francisco) and me.
Me, being the only girl.
It was almost seven or eight boys and me, but Daniel (Ricardo's nephew), Alejandro and his son (friends) couldn't make it.
Probably a good thing for me, not being too outnumbered...

So motored out the channel and came within 2' of a turtle, who looked very familiar.
Lots of grassy stuff growing on him!
Could he be the one we saved?
OH I HOPE SO!

Ricky, Chumbo and Ricardo enjoyed sitting on the bow.

We motored through the San Lorenzo Channel (I have been through this channel more in the last week than I did in our three years of cruising) to the dorado grounds.

First we caught some skipjack to use as bait.
A N D
T H E N...
Here we go again!
First Chumbo reels one in. 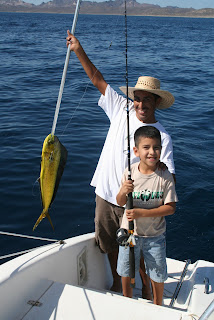 But it didn't want to be caught and got off the gaff.
Uh oh.
Uh oh!
Uh ~ we better catch some more...
Then Ricky had one on. 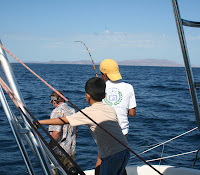 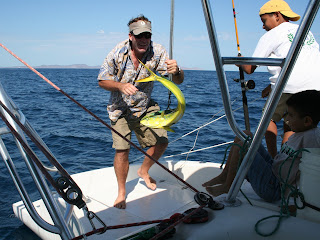 Ok, these dorado are going wild, so now we toss them into the cockpit before taking the hooks and gaff out.
So instead of bloody decks, it's really bloody cockpit.
But happy boys! 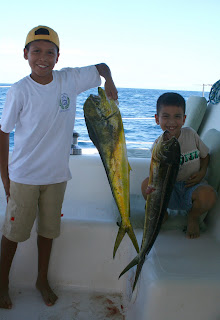 Chumbo did not want to put his feet down into the bloody gooey cockpit floor.
I, being the only girl, did not blame him.
Ok, so here we go again, again, again.
Ricky gets another.

Apparently Jim feels there is not enough blood on the decks so gaffs this dorado's artery.
Then flings him in the cockpit. 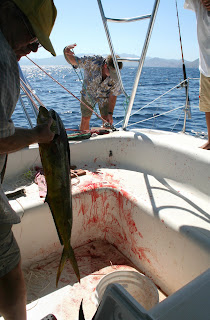 There are blood droplets half way up the radar arch...
Now do you get the second part of the post title?

All this fishing tired Chumbo out, so he took a nap.

And Ricky drove the boat for awhile.


We actually woke Chumbo up to pull in the next one! 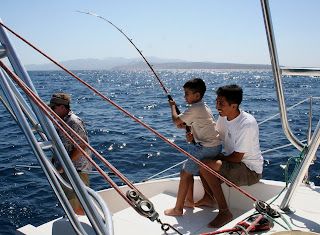 Then after it was tossed into the ice chest with the others, he immediately went back to sleep and slept until we were back at the dock.

So, 4 dorado made it into the ice chest.
We had 5 to the boat and one got away (with a gaping hole in his belly).
And a total of 8 hook ups ~ one being a huge one as it snapped the line immediately.

Posted by Jim and Heather on Meerkat at 7:15 PM

Labels: at least I didn't have to clean it all up by myself

What's that saying about "teach a kid to fish and he'll be a drunk by 21"... something like that. As soon as Maria gets back to Mex, I'm going to grab my sister and Jolea and we're coming south. Nita is sort of afraid of going to Mex, but when she sees fishing pics she'll be all over it. Fish blood doesn't bother her at all.

All I can say is, "I'm jeslous now". I do miss my fishing buddy.

Ha ha Jomamma! Not these boys! They are SO polite, they ask me before they use my toilet, ask Jim if they can look at his fishing book (even though the book was sitting out there right in front of them and everyone else was just looking at it) and I showed them all the granola bars, food etc, and they would still ask before taking a granola bar! Then thank me. Each time. Plus their parents don't drink. They are such great kids!
You ladies are welcome anytime here!
I'm getting used to the fish blood...

And ha ha Lucy! I was glad when Jim found out that you liked to fish! Then you two would go off in the dinghy for hours and I could have the boat to myself. Remember, I did spend half my honeymoon fishing in the dinghy...

I just can't believe that they just casually caught all those Dorado! Oh, how I miss Dorado! And you now have enough that you can even make Ceviche with some of it - a favorite - if it is made from Dorado! Enjoy!

Hey! That kid is not you're nephew. Just to remind you, you only have 2 nephews (Zachary and Joseph). I think you've been in Mexico too long.

Well, okay -- maybe he can be your Mexican nephew.

Actually Meghanmoo, we have a nephew down here (and two in Oregon and one in Texas - and don't even get me counting the nieces - I think there are 8, plus a load of grandnieces and grandnephews!) on Jim's side. Jim's brother John has a son here - Johnny. And (you'll love this), he calls my Mom (your grandma Margo) Abuella (grandma!). Ask your grandma - she met him!