Something About a Cancer Swim

We missed exactly what this was for, but there were people either doing a swim from Balandra to The Municipal Pier in La Paz, or a triathalon, or kayaking or something.
We think to raise money for cancer treatment or cancer research or to raise awareness of the problem or something.
What we didn't miss was seeing the Port Captain's boat and several pangas, one with flags blowing in the wind surrounding two kayakers and four swimmers. 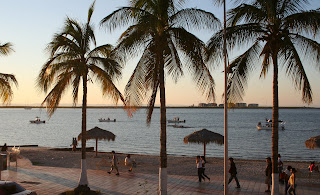 We also didn't miss the big stage and loud music they had going on at the landing spot .
Apparently this was so the swimmers would know where to go and never have to raise their heads out of the water or something.
I'm sure they could have heard the music from Balandra (about 10-12 miles away).

So to get away from the loud music we went to the new Rancho Viejo Restaurant on The Malecon for drinks, tacos, chili rellanos and so Dave could entertain us with his Pope impression . 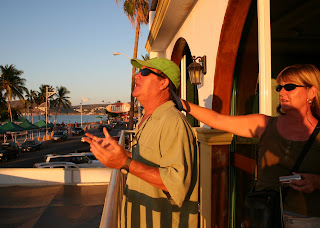 When the swimmers got close to the beach all the participants in "The Korean Festival", which was being held 1/4 mile down the road from "The Other Festival" came running down The Malecon to watch.

A convergence of festivals!
Posted by Jim and Heather on Meerkat at 11:34 AM

Labels: two festivals in one night what more could we ask for