We decided next year to be the only sailboat in the La Paz Gold Cup Marlin Tournament.
Wouldn't that be funny if we won?
And caught the winning marlin on a Snoopy fishing pole?
That is our plan.

For something to do yesterday we joined the tournament festivities at Costa Baja.
After going to the boatyard and scheduling our haulout for Monday.
Ick.
Then a float in the pool to cool off.
Then we joined the festivities.

We watched the weigh-in of the only "keeper" fish, who turned out to be about 50 pounds underweight...
I guess it wasn't a "keeper" after all.
He (she? I didn't check) weighed just over 147 lbs and to qualify the fish has to weigh 200 lbs.
Any underweight fish brought in costs the fisherman $50 US per pound underweight.
This fish cost the fisherman about $2,500. 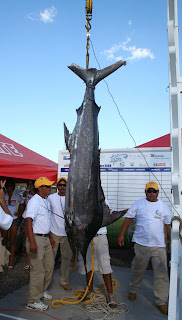 Ouch.
All the money goes to charity, so sometimes an underweight fish is a good thing. 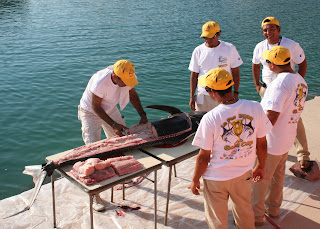 I think the fish goes to charity too.

We watched the Tecate chicks pose for pics.
Watched this little kid watch me making faces at him.


Watched the flags blow in the breeze. 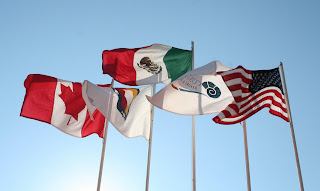 Watched all the fish-less boats come in.

Ate hot dogs and bratwurst.
Watched Dave & Kellie's neighbors come in marlin-less, but dorado-full.
Which they shared with us - thank you!
Watched them wash the boat and asked the Dad if he would send the boys over to our boat after they were done.
He said no... 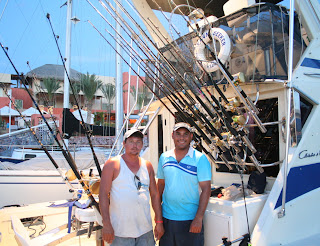 Quite the quiver.
Quiver of fishing poles with expensive reels!
Watched them wash their lures. 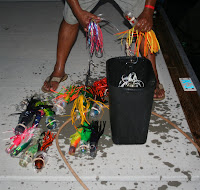 Can't have those lures tasting like salt water now!
We should take some cleaning lessons from these guys ~ they were good.

Then watched the Polynesian dance show.

This little girl was stunning. 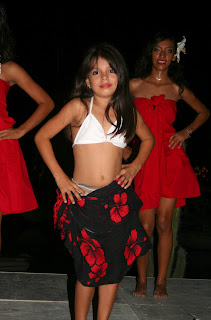 Then explored.
Found our new beds.
Beds on the beach with a breeze. 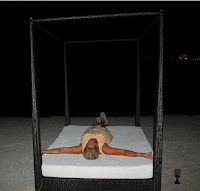 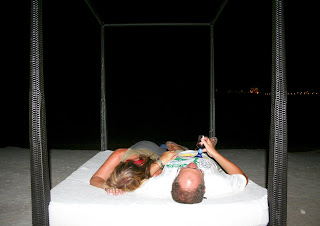 I wonder if Costa Baja would mind us all sleeping out there...
Posted by Jim and Heather on Meerkat at 8:32 AM

Go for it, all they can do is wake you and tell you to leave... every night!

Sleeping on beach beds sounds a whole lot better than in your boat cabin in the boatyard...icky pooh. It won't be hot or sticky or stinky, but you'll have to be tolerant of the drunk passersby that can't resist climbing in with you! Then again....ooohh naughty me!!