We motored further North and anchored at Isla Colorado to explore the three pretty white sand beaches.
And swim.
And beachcomb.
And watch pelicans sit in trees.
And take pictures of the boats. 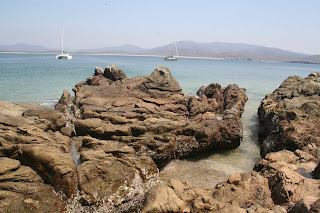 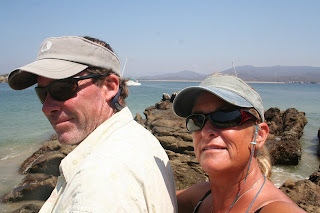 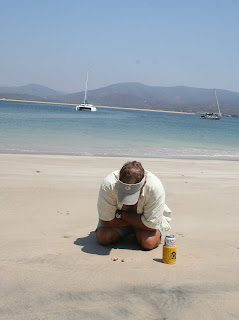 We watched one poor hermit crab be hounded, held onto, poked, pinched, followed and grabbed by several others for about 45 minutes...

Either she was a female in heat or she had the best shell on the beach! 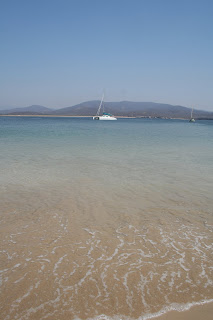 We went to the south beach where we used to go years ago ~ still beautiful! 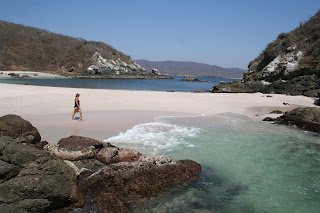 Then motored over behind Isla Passavera for the night.

Glenn on "Beach Access" had invited "Lovely Reta" and us over for movie night in his cockpit!
Sort of like being at the drive in movies...

And we had a nice view of "Meerkat" and "Don Quixote" from the movie theatre.

We ended up with one trimaran, one monohull and three catamarans in the anchorage!

Wow, have times changed...
Posted by Jim and Heather on Meerkat at 11:36 AM

Labels: memories of putting fritz the dog in the water at the south beach and making him swim to shore then doing it again

I read all of those from the birthday to this one... I'm tired, such a busy fun time you've had. Happy belated Birthday.

I love the picture of Uncle Jim studying the hermit crabs. So funny.

I agree, the picture of Uncle Jim and the Hermit Crabs is great! Little boys always love hermit crabs.

Hope you are back to Banderas Bay and Punta Mita by now. I am off to San Diego to see my grandsons!