Time for a little more culture.
We met up with Vic and Roberta of "Apollo II" (another catamaran) at the music stage for some Carnaval music.
First the mariachis!
Who were great.
I was just about to take a few pictures of them but unfortunately the mariachi man on the end fell to the stage.
He had been dancing around a little and we all thought his fall was a joke.
It was not a joke.
Apparently he had a heart attack.
A couple of gringos went up and started cpr, but quit after a few minutes.
Jim and Vic were off getting beer and didn't even see it happen.
When Vic returned, Roberta and I (who were both in the midst of freaking out) explained what was going on, so Vic (a retired cop) went up to continue cpr and help out.
Finally the police arrived.
An ambulance.
But it was too late.
Pretty heartbreaking to watch...

Apparently the show must go on, so we were treated to some traditional ballet folklorico with all the lovely costumes. 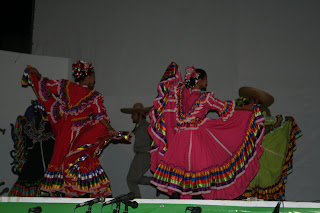 And some incredible rope tricks!

This act was great!

It was kind of hard to really enjoy the show.
We tried.
But we were thinking more of the other mariachis and their families...
Posted by Jim and Heather on Meerkat at 9:01 AM

Labels: in memory of the mariachi guy on the end

OMG! How horrible. was he the lead singer? I can't believe the show went on...

How sad.
I also can't believe the show went on.
So sad.

I'm not surprised the show went on. Maybe if the guy had been the lead act or something they might have made more of an issue of it, but maybe they wanted the audience to believe he just went off in the ambulance and would recover. Anyway, he probably would have wanted the show to go on. Good on Vic for trying to help save him.

Yeah - it was kind of weird, but it is Mexico...
Oh no Bliss - we are in Tenacatita! Leaving for Chamela tomorrow... Can't believe we are going to miss each other...

How horrible for all...him, his family and friends, and all who were unfortunate to have witnessed his demise. Good on the Gringos to try to help save him. It would have been great if it were a slight attack and maybe they could have saved him.

It doesn't surprise me that the show went on...as you said, it is Mexico.