Breakfast and Provisioning and Watching for the Window in Chamela

First thing first ~ right?
Beer.
Food.
We moved over to the North end of Bahia Chamela along with "Lovely Reta" and met up with "Gosling" and "Sea Level" ("Sea Level" being a catamaran designed by our second favorite designer, Jeff Schionning ~ our cat being designed by our first favorite designer, Eric Lerouge).
Time to buy some beer for Jimmy and get some huevos rancheros for me.
So when Jim and Kent of "Sea Level" asked if we wanted to join them for breakfast in the small town of Perula, there was no hesitation on our parts.
You can always buy beer after breakfast ~ right?
So in to the beach where we wandered the dirt streets in circles, because Kent thought she knew where she was going. 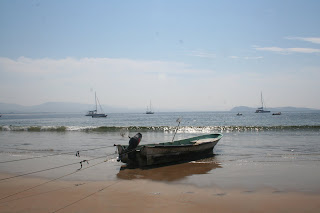 Not right.
My Jim finally asked a guy who pointed us in the right direction.
To food.
Found a place by the run-down town square and proceeded to order.
We (was up to six of us now as Fran and Jean-Guy from "Gosling" had joined us by then) all ordered orange juice and different egg dishes.
About 10 minutes later we see the owner walking back towards the restaurant with a big bag of oranges.
I guess they did not expect six for breakfast...
Buy as dishes and drinks are ordered ~ so typical.
Four of us got our meals and were pretty much done by the time the other two got their meals.
So typical.
Then we hit all the local tiendas and found fresh food to buy!

Enough to get us up around Cabo Corrientes and into Banderas Bay. 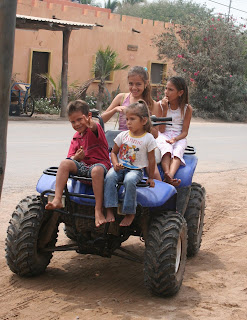 We also found out you can drive an ATV here at any age.

And have as many underage passengers as you want.


Now we are waiting for the wind to die down.
Watching for the weather window to head further North.
Waiting to watch a few boats leave early in the evening to head around Cabo Corrientes ~ the Point Conception of Mexico.
We will leave in the middle of the night or really early in the morning and head to either the small anchorage at Ipala or back into the bay.
Posted by Jim and Heather on Meerkat at 5:00 PM

Labels: bellies full of breakfast and frige full of beer

WOW. We are so happy to read about all the fun things you are doing and the beautiful places you are visiting. For a moment, we thought we were going to read that you went boogie boarding in your birthday suit, not your crown. It looks like fun, You are probably now back in Banderas Bay. We hope that your beat around Cabo Corrientes was smooth and fast. Lots of love, The SHALS