Watch What They Type Too... 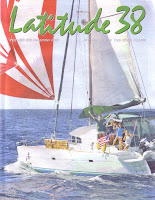 Oh boy!
A new Latitude 38 Magazine!
Such excitement when you are cruising!
Even more fun when you know the cover models ~ the family of "Don Quixote"!

But then you read the letters and get a laugh... 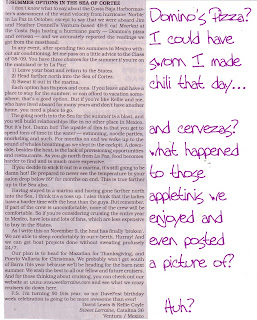 And I forgot the latest edition of "Jim and Heather's Small World"!

At the dock party on Friday night we were talking to Eric and Nikki ~ asked what kind of boat Eric had, blah, blah, blah, a Morgan Out-Island blah, blah, blah.
Really?
And you bought it in San Carlos?
Jim and I look at each other...
What is the boat named?
Bamboleo!
Hey, did you buy it from Ivan, Ariel's brother?
YES!
Amazing.
We met Ivan at Ariel's retirement party and Jim, Stan and Alan all crewed for Ariel between Ventura and Costa Rica.
Too bad Ariel doesn't talk to us anymore...
But at least we still have Stan and Alan in our lives!
Posted by Jim and Heather on Meerkat at 6:29 PM

Labels: yes i would like a large pizza with pepperoni and pineapple please

Hello Meerkat..
stepped over here from a "shared profile interest"-- living aboard.
Though i've only sailed a few times in my life (living in waikiki about 20 yrs ago!)i have for years harbored (no pun intended) the dream.
Currently racing rats as a means of divesting myself of said curse; don't yet know if it'll be an ozark hermitage or something i can singlehand, but it's coming... BOTH would suit me :)
soon as i win the lotto, mayhap.
nehow, thanks for the chance to live the dream vicariousy...
More soon-

You have one hell of a memory Auntie Heather!

Welcome Cygnus! Keep posted because we will soon be "living aboard" as we cruise!

Runs in the family babe.