Monks on The Malecon

The other night we watched a ceremony on the Malecon conducted by four monks from the Gashar Tawon Khangtsen Monastery in southern India.

Per the monks blog (yes, they have a blog!):
"The original Tibetan monastery was destroyed shortly after the occupation of Tibet and only 9 monks from that monastery managed to escape. Once in India they set to rebuild the monastery and it has grown since. H.H. the Dalai Lama recognizes this monastery as one of the cornerstones for the effort to maintain the Tibetan culture and traditions alive while in exile".

As part of the "Tibetan Monks 10th World Peace Tour" they spent some time in Baja and ended their visit to La Paz with this ceremony “to help eliminate negative forces in the environment in which we live.”

I'm all for eliminating negative forces, so talked Jim into walking a mile down the Malecon to see this. 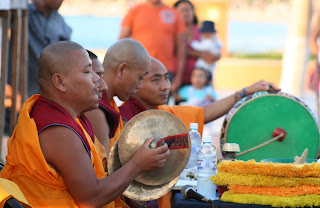 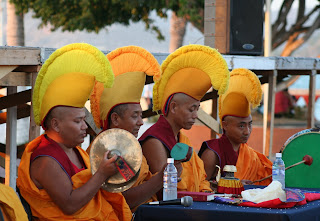 The ceremony consisted of chanting, praying, a little drum and bell playing and the most heartfelt thank you speech in English for the hospitality and friendship the local business people provided to them.
It really was lovely and not something you see everyday! 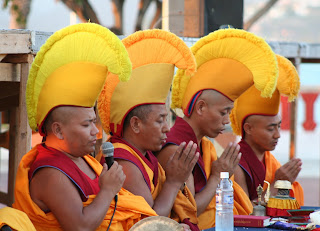 I also enjoyed watching the reactions of the locals, especially some of the kids!
This boy got a little sleepy towards the end... 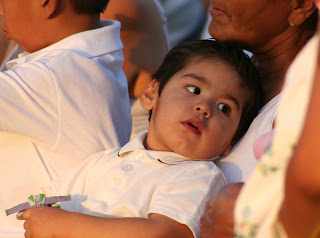 but the girls in crocs (shown in previous post) were mesmerized the entire ceremony.

For more information, see their blog at:
http://monksinbaja.wordpress.com/
Posted by Jim and Heather on Meerkat at 2:47 PM

Labels: Malecon, Monks (I can pretty much guarantee this will be the only post with a label of "Monks")