Everyone moved a little slow this particular morning...
Made coffee, then took turns in the shower.
Re-jigsaw puzzled the back of the car .
And on the road again.

And now for the post title:
"Deja Vu"
Back to Mama Espinosa's in El Rosario for a great breakfast.
This time it was quick, because we were early!

And now for the post title:
"Deja Vu"
Back through the boulder fields of Catavina, where we did a quick pitstop. 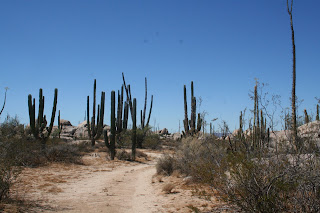 And now for the post title:
"Deja Vu"
Back through road construction.
Keep in mind folks, this is the only road down Baja!
Which way do we go?
To the left of the tractor and the right of the semi?
Under the semi? 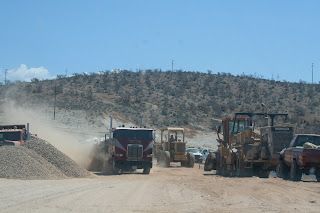 And now for the post title:
"Deja Vu"
Waved to the Bahia de Los Angeles turnoff.

Then actually took a little side trip!
Drove out to Santa Rosalillita to see the Singular Marina in the process of being built, along with the harbor for the "dry canal" started by Ed Grossman of Marina Seca in San Carlos.
Long explanation on this project.
Will fill you in if / when it is completed.

And now for the post title:
"Deja Vu"
And went to the Malarrimo in Guerrero Negro! 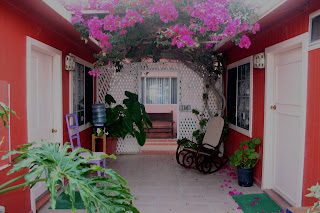 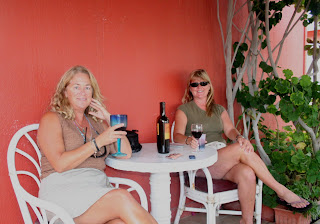 Jim somehow got sick at this point, so we put him to bed...
Poor guy ~ had a fever and all.
Dave sat in the bar and played on the internet.
This is when we first started watching the newest tropical storm form.
Kellie and I sat outside and enjoyed the cool Guerrero Negro weather!

And now for the post title:
"Deja Vu"
Then we enjoyed a great dinner with our waiter friend Saul, who now knows our lifestory...

Took Dave's leftovers and my leftovers to Jim, who ate it all.
Then we took a short walk for aspirin to cure Jim!

Books and to sleep.
Posted by Jim and Heather on Meerkat at 6:01 PM

Labels: this all just seemed so familiar

Jeez, I thought North Texas road construction was bad... for a minute there I thought you had driven into Afghanistan.... that looks like a war zone.