Yesterday was the Independence Day Parade down Obregon, the street the runs along The Malecon.
For some reason the parade starts at 8:00 am.
Uh ~ remember the 50,000 people all partying the night before?
And they expect them to be at The Malecon at 8:00 am the next morning?
I am assuming the people who picked 8:00 am were the same ones who forgot to order the porta-potties...

Anyway, I made it!
The parades here are a little different than the ones we see in the US.
The people marching are all the school kids in their uniforms. Some of whom have to concentrate really, really hard. 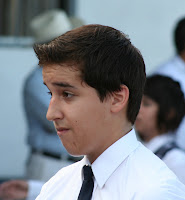 The men in charge of keeping the kids lined up take their jobs very seriously.
A little too seriously.
They whistle, yell, count through megaphones, stomp and so on.
The kids just seem to tolerate it.

The governor and all the bigwigs sit on a stage and watch the kids march by.
They are protected by a lot of army men.
This one included. 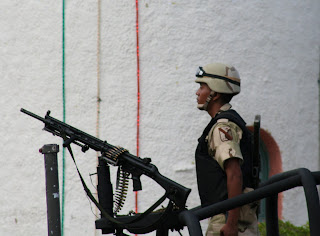 There is something a little disturbing about seeing 19 year old "boys" with big guns watching over a parade of little kids.

But wait! Here come the reason the "big boys" are there!
Marching girls in high heels! 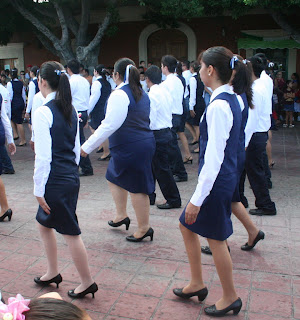 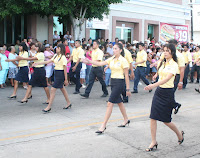 Uh ~ did the same people who picked 8 am as the starting time and forgot to order the porta-potties tell these girls what shoes to wear?
High heels in a parade?

I think the high heels even stumped these guys sitting on their decorated bench.

That disturbing thing came up again.
Watching 300 people with weapons march down the street, with half of those weapons pretty much pointed at the crowd.

Sirens!
Sirens full blast on the Federale cars. The local police cars. The firetrucks. The Green Angel trucks. The other police cars.
All full blast and all in a row.
So if you didn't already have a headache from the partying the night before, you had one now...
Two of the siren-blasting firetrucks had been donated by The City of San Luis Obispo! 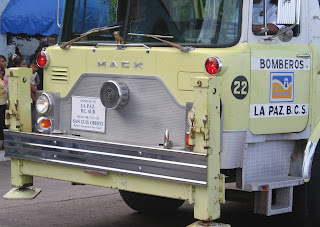 That was nice to see.

Then about 6 or 7 different groups of people on horses.
The ladies were all sitting side saddle! 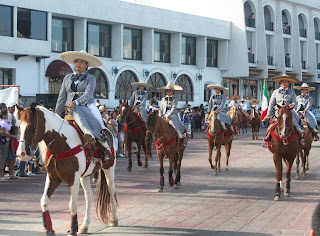 No marching bands.
No floats.
No clowns tossing candy.
No shriners on little tiny mini-bikes.
No stilt walkers.
No princesses or queens of the parade waving with that special princess wave.
The horses were the only thing that even remotely reminded me of a US parades.
Oh, and the firetrucks.
But they always come at the end of the parade in the US.
Posted by Jim and Heather on Meerkat at 11:26 AM

Labels: send in the clowns