Day 6 ~ Guerrero Negro to Santa Rosalia or "We Didn't Think We Would Be Eating Hot Dogs Exquisitos So Soon!"

The aspirin did the trick for Jim ~ he woke up feeling better, alive and without a fever!
We think he had a bad shrimp...

Coffee, showers and jigsaw puzzle ourselves back in to the car once again.

South out of Guerrero Negro through the farming area of Vizcaino and down in to the oasis of San Ignacio.
That "Deja Vu" thing of the day before kept happening again...
De do do do, de do do do [insert twilight theme music here].
A great breakfast at the same place as last time.
A visit to the mission.

A visit to the big tienda with all the t-shirts, knick knacks and hats you could ever want. 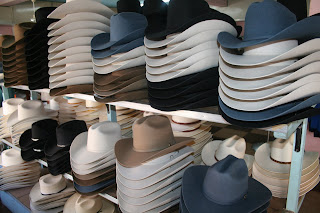 Nothing we could live without...
A walk around to Casa Leree.

But the gardens were closed, as Juanita was at the mission.

A quick sidetrip to the interesting and very decorated town cemetary.
Then back out through the date palm lined road and down the Cuesta de Infierno.
Yea - glad to get that Cuesta overwith!

And down in to Santa Rosalia, where we arranged for rooms at Las Casitas.
To the Singular Marina to see who was around.
To the old marina to see who was around.
Visited in "The Palapa of Knowledge" which is no longer a palapa with some friends of Dave and Kellie's.
Posed in front of the Marina Santa Rosalia sign, where we had posed on our 5 year anniversary in May of 2000! 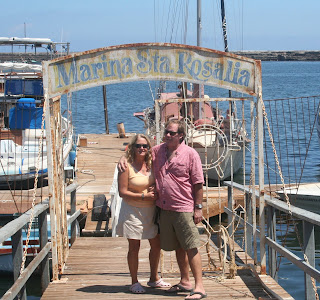 Yep, we look exactly the same 8 years later .
Back to the hotel where our rooms were now ready.
Ready rooms mean happy hour and check the weather on the internet. 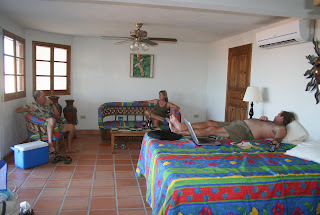 Nice big beautiful room we had!

Then a taxi in to town.
We always get dropped off right in front of the chuch designed by Gustave Eiffel.

And now to the post title:
"We Didn't Think We Would Be Eating Hot Dogs Exquisitos So Soon!"
Dave and Kellie had no idea that when they headed South at the end of last year's hurricane season, that they would ever be in Santa Rosalia again.
We of course had just driven through here about 8 weeks ago, and had no idea we would have to go renew our visas and would be in Santa Rosalia again so soon.
So we enjoyed the hot dogs!
Yum ~ they really are the best!

Caught a taxi back to the room, where hora feliz continued (they have long happy hours here) and the checking of the weather on the internet continued.
Dave pretty much set up an office in our room... 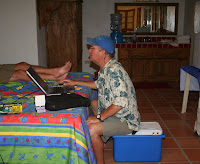 We were now watching "Tropical Depression or Storm Lowell".
(Can't remember if it was a depression or storm at this point...)
Ok, time to head back to the boats.
Posted by Jim and Heather on Meerkat at 11:01 AM

I love the size of the hotel room! Sounds like it was a fun road trip after all.