Per Wikipedia ~ Edited just a tiny bit by me:
The Grito de Dolores ("Cry of Dolores") was the battle cry of the Mexican War of Independence, uttered on September 16 1810 by Miguel Hidalgo y Costilla, a Roman Catholic priest from the small town of Dolores, near Guanajuato.

Hidalgo was involved in a planned revolt against the Spanish colonial government, and when the plotters were betrayed, he declared that war should be waged against the Spaniards. Just before the dawn of September 16, 1810, Hidalgo ordered the the church bells to be rung and gathered his congregation. He addressed the people in front of his church, encouraging them to revolt. The exact words of the speech are lost; however, a variety of "reconstructed versions" have been published. Hidalgo is believed to have cried: "Long live Our Lady of Guadalupe, death to bad government, and death to the Spaniards!" The resulting Battle of Dolores, the first engagement of the insurgency, occurred 12 days later with the massacre of the entire colonial garrison of the town, more than 500 Spanish and Criollo loyalist soldiers. The insurgents suffered more than 2000 casualties. Mexico's independence would finally be recognized by the Spanish crown on September 27, 1821, after a decade of war.

This event has since assumed an almost mythopoeic status. Since the late 19th century, Hidalgo y Costilla's "battle cry" has become emblematic of Mexican independence. Each year on the night of September 15, the President of Mexico re-enacts the event by ringing the bells of the National Palace in Mexico City. He repeats a cry of patriotism based upon the "Grito de Dolores" from the balcony of the palace, to the assembled crowd in the Plaza de la Constitución, or Zócalo, one of the largest public plazas in the world. This event draws up to half a million spectators.

On the dawn of September 16, or Independence Day, the national military parade starts in the Zócalo, passes the Hidalgo Memorial and ends on the Paseo de la Reforma, Mexico City's main boulevard. Independence Day is considered a patriotic holiday, or fiesta patria (literally, motherland holiday).

La Paz has it's own version of this event tonight at the Governor's pad.
Evidence the town is getting ready for the celebration...
We have seen many of these flag carts all over town. 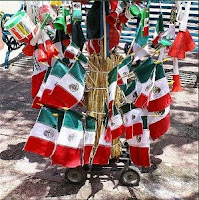 There also will have a parade in the morning. 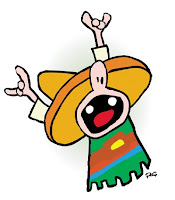 Let's just see how many locals make it to the parade after the big party.
Posted by Jim and Heather on Meerkat at 2:09 PM

Well aren't you just the queen of local culture... that was very interesting.